At least once a year a news story pops up about an angler that turned what could have been a... 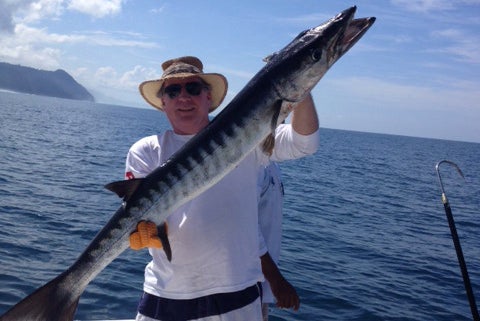 At least once a year a news story pops up about an angler that turned what could have been a state- or world-record something into deep-fried goodness before certification takes place. According to this story on Petethomasoutdoors.com, such is the case with Dennis Tilden’s 32-pound barracuda hooked in Mexico. Per the article, the current IGFA world record weighs in at 28 pounds, 6 ounces. It goes on to say Tilden’s barracuda, caught during a tournament out of Crocodile Bay Resort on the Osa Peninsula, was weighed briefly before its head was removed for a soup. As for the rest of the meat, it was prepared as ceviche on the boat. OK, let’s back it on up for a minute. ‘Cuda head soup and ceviche? Have you ever smelled one of those fish?

I realize that in different parts of the country, people eat barracuda, but in the States I’ve yet to meet an angler that has a taste for these slimy toothies. Ever wonder why a dead butterflied barracuda is a choice attractant for shark anglers on tropical flats? Because they have an oily, pungent stank like no other fish I’ve smelled. More importantly, however, barracudas—big ones especially—are known to carry ciguatera. This toxin essentially makes the flesh poisonous. For all I know, Pacific ‘cudas don’t carry it, but I’m sure the West Coast fish don’t smell any more appetizing than the ones I catch on the East Coast. Mr. Tilden, congrats regardless. That’s a serious fish. Had I caught it, I’d have passed on the ceviche and insisted I keep the head for a skin mount. I’ve always wanted a big ‘cuda head for the man cave.

Anyone want to change my mind about eating barracudas? Am I missing out on some good chow?