Do You Lay Off Certain Species When The Water Gets Too Hot?

This morning, I came across an article by fishing guide Travis Frank in Minnesota’s Star Tribune about muskies going belly-up... 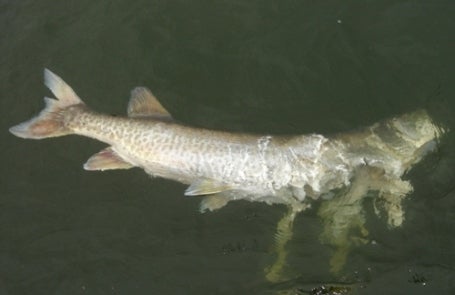 This morning, I came across an article by fishing guide Travis Frank in Minnesota’s Star Tribune about muskies going belly-up in Lake Minnetonka thanks to water temps that have shot into the 80s. In the story, Frank outlines some very smart tips about targeting a cold-water species like muskies during hot times of year. Of course, I think the underlying theme, what he’s really driving at, is maybe don’t target cold-water species like muskies during hot times of year. Frank writes, “I know that there are no laws being broken and I have no right to do this, but I ask this anyway. In a growing sport that has more anglers than fish, I think it is only fair for us to consider the resource before our very needs. The fact that my livelihood has been put on hold and I have cancelled all of my muskie guide trips until it cools down should tell you where I stand on this issue.”

I don’t know Frank personally, but I know a lot of anglers and guides. I’m not going to name names, but a few have taken heat over shutting down their entire guide operations because of hot water, particularly in trouty arenas. They laid down the law to guides under their umbrellas: no one gets on the river until I say so. But when you operate in a region with a bunch of guide services trying to survive, doing the right thing can create turmoil. You’re guides are off the water, but so-and-so’s guides are still fishing. Now they’re the bad guys and you’re the goody-goodies. It can get ugly.

One of my best fishing buds is a muskie freak, and despite knowing he can whack them all summer, he diligently puts up the muskie tackle by the end of June and usually won’t touch it again until late September. I try to avoid targeting trout and river stripers once the temp jumps above 70. What people often don’t understand, at least I think, is that it’s not the hot water directly that will kill the fish. They can survive provided they’re left alone in the little cold-water seep they’ve found, or in the cooler bottom of a pool. The death sentence is making them expend energy fighting, because it’s much harder for a fish to catch its breath in hot water when the battle is done.

All of this said, I understand that not everyone is going to play it the same. After all, as Frank suggests, there is no legal issue here. It’s purely moral, and purely up to the angler to decide if he or she should be targeting a certain species in hot water. So I’m curious: How many of you consciously stop targeting certain species when the heat is on?