Much like the honey badger, which “doesn’t care that it’s getting stung by bees,” this rainbow trout seems to care... 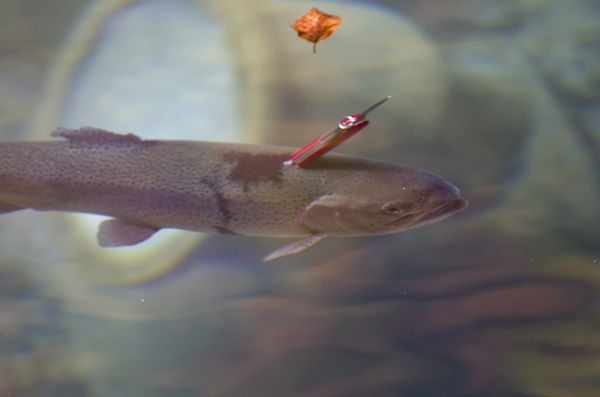 Much like the honey badger, which “doesn’t care that it’s getting stung by bees,” this rainbow trout seems to care less that it has a Swiss Army knife lodged in its cranium. Several photos of the fish surfaced on Elitedaily.com, along with a little story that tells you nothing useful, really. All I gathered from it was that this trout lives (rather fittingly) in Switzerland, and author Adam Pliskin says, “It’s part trout, part android killing machine. All the other fish in Switzerland better watch out ’cause this guy is one mean mother[bleeper].” I think Pliskin is only partially correct.

It’s a little hard to tell from the photos if this is a trout swimming in a lake or in a Cabela’s-esque cement pond, but in either case, I’d like to think this was a funky accident. We’ve all been there: you’re standing by the water with a bottle of wine and expensive cheese wrapped in wax paper. You reach for your trusty tiny Swiss Army knife and…oops…in the drink it goes. I’m surmising this only because there were two tools opened, but I could be wrong. Now, while I don’t think we have an “android killing machine” here, what we do have is a tough fish that is uncatchable. He eats your fly, you think you’ve go him, and it’s over with one head shake. Built-in line cutter.