Four Pointers for Scoring Big Bass in the Flooded Jungle

I’ve got a good friend that’s an exceptional offshore finesse bass angler. In fact, he’s so good that he rarely... 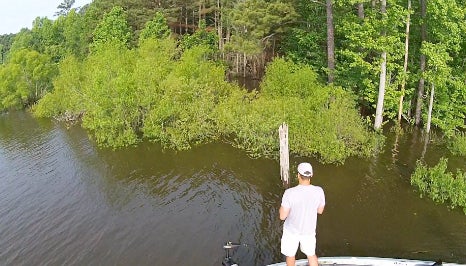 I’ve got a good friend that’s an exceptional offshore finesse bass angler. In fact, he’s so good that he rarely plays the typical shoreline game. But the other day he called with a problem; he suspected that the bulk of the bigger fish on his home water had moved into flooded brush after a quick rise in lake level. He wanted to know what to do. So I gave him the following pointers, which have always helped me be more successful when playing in the jungle. Hopefully, they’ll help you, too.

Rise and Fall: As a general rule, if the water is coming up, most fish will move into shallower bushes. If the water is dropping, the bass will retreat to deeper bushes. It may take a little time for the fish to adjust, but you can typically count on this theory being correct. Knowing this will help you decide which brush lines are worth the most effort.

Field of View: Take note of the absence or abundance of brush. No brush could mean you have a solid rock bottom, or it could mean there is a deeper ditch/depression there that acts as a highway for bass to travel through. On the flip side, super thick stuff means the area you’re looking at is likely a high and dry most of the year, and that it’s likely a flat or elevated spot.

Be Seen: Most guys attack flooded brush with a slow finesse approach, but it’s certainly not the only (or best) game in town. I say start with bigger reaction baits, and stick with bigger reaction baits, especially if the amount of flooded brush is vast. If you think about it, a bass may only catch a quick glimpse of a lure before it ducks behind another branch. They have to react quickly and attack. You want to make sure that more bass have a chance to catch more glimpses by using larger profile baits that can be worked more around the perimeter of the brush than directly in the center.

Clear Choice: In my opinion, the best overall line choice for thick flooded brush is heavy fluorocarbon because of its low stretch and high abrasion resistance. Although braided line works well to get the bass out of cover fast because of it’s lack of stretch, the ultra thin diameter also tends to cut into the soft, wet wood. The result after hooking a big fish is often pinning it somewhere in the branches and losing it.