Here’s What A 1,058-Pound Marlin Looks Like Going Nuts On The End Of Your Line

Perhaps you’ve already caught wind of this story on the news, but if you haven’t, the cockpit video is worth... 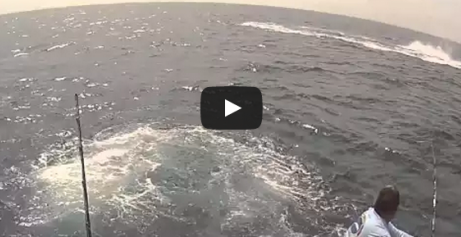 Perhaps you’ve already caught wind of this story on the news, but if you haven’t, the cockpit video is worth a watch. Last week, 16-year-old Kai Rizzuto of Brooklyn, NY, was visiting his grandfather on Hawaii’s Big Island. They booked the charter boat Ihu Nui, set up on the troll, and they next thing they knew, Kai was going toe-to-toe with a grander. According to this story on CNN.com, both Kai and grandad—and the Ihu Nui crew—release all blue marlin, but this monster fought so hard, it was belly up at boatside. The fish will be professionally processed, and the meat given away to anyone that wants a taste. Now, we’ve all seen photos of grander blues, but it’s not as often you see a fight video. Consider the size of this fish while watching how wildly it throws itself out of the water. I once watched a 600-plus-pounder come in and was blown away. I can’t imagine what it must be like to be on the rod with a billfish that massive thrashing on the other end.