Think the boat in this photo has too many horses under the hood? Of course it does, but it proves... 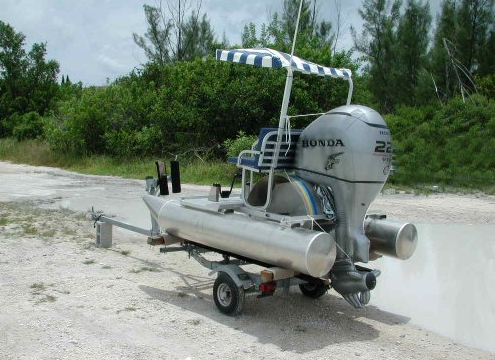 Think the boat in this photo has too many horses under the hood? Of course it does, but it proves the point that you can tell just by looking at someone’s boat how much they care about speed, and how far they’re willing to push the limits of horsepower. Truth be told, juicing outboards above the recommended ratings has been happening in the tourney circuits for decades. Not many admit it, and I’ve never participated. Furthermore, I don’t really know anyone firsthand that has done it, but lets just say I’ve heard stories of 200hp cowlings getting sneakily slipped over 250hp engines. And I’ve heard much worse. There are lots of liability issues with tricks like that, so don’t do it. But what you should do is have a basic understand of how and why engines are rated, and how to use that info when boat shopping.

In a nutshell, manufacturers and the Coast Guard use a few different math formulas to set a max HP rating. For example, one formula is length X width X 2 = max HP (rounded up to the nearest 5). So a 20ft boat with a 90-inch width could take a 300hp, give or take for other variables. The thing with bass boats is, lots of other factors make or break the performance because of their need to be such versatile vessels. It’s such a science that it would take an entire book to get into all the details, but to put it in familiar car terms, some boats that are built for speed while others are built for comfort, and still others are built just for pure function. It’s up to you to decide what attributes you’re after. But I can tell you a few ways to quickly make a better decision about motor size.

For starters, insist on taking a test ride. It’s best if you do so with a few different HP engines within the recommended range for the same boat. I know, that’s hard when you’re cornered by a salesman at a winter boat show, but your motivation should be to know that it downright sucks to be stuck with an under-performing rig. I’ll be the first to let you know you don’t need to push it to the max HP rating to get great performance, but you do need to put the “fat” and “skinny” version of your boat to the test. The fat version includes batteries, full gas, full tackle compartments, full livewells and 2 passengers. If that fat version is huff’n and puff’n, then it’s not the setup for you. Various props and jackplates could slightly tweak the performance, but they’re just minor tweaks. The guts of your good decision should be a byproduct of the elbow grease it took to load the boat down before the test. It’s used boat salesman tactic #1 to impress the potential buyer with the top speed of an unloaded boat, so don’t fall for it. Most never feel the choked-out slow version until it’s too late.

The second thing to critically analyze is the hole shot, but don’t just test this on calm days. Get out there and dig around in some swells with a full load, even loop around and climb your own wake if necessary. That’s the true feel of the torque you’ll need to do what you want to do. Psychologically, I feel that choosing an optimally powered vessel/motor can make all the difference in your temperament on the water. Conversely, an erratically handling overpowered rocket can put you just as on-edge, so do the test drive right, choose wisely and keep the legal cowling.