Make The Right Call When Fishing “Between” Water

For those of you that like to pick apart shoreline cover, let’s say docks for example, how do you go... 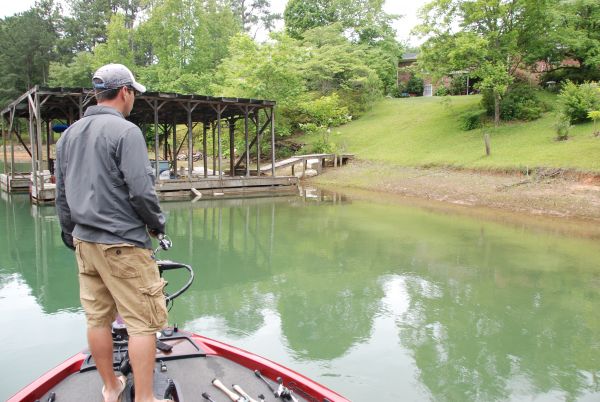 For those of you that like to pick apart shoreline cover, let’s say docks for example, how do you go about covering the stretches between the docks? I’m just guessing here, but I would imagine a good percentage of you pick up a moving bait (like a spinnerbait or a crankbait) and start flinging it to the bank while moving quickly between the docks. This method is essentially something to just keep a line wet, or pass the time, until you get to the next dock. I’ve been down this road a lot, and the truth is I can count on one hand how many times that random flinging methodology caught me a truly good bass.

When you tournament fish, you feel like you’re always racing against the clock, and that teaches you to quickly calculate the precise time it takes to do things like travel from one dock or piece of cover to another. My instant calculations to calibrate a quick “between” strategy would go something like this: It’s going to take me 10 seconds to put the rod down and pick up another, 1 minute by trolling motor to get to the next dock on full speed, or I could choose to take 30 seconds to get there by idling with the big motor and not fishing at all. But don’t forget, you have to sit down and start the motor, which takes a few seconds, then an equal amount of seconds to shut it down and get back to the front of the boat. Then factor in the unattractive noise that the idling makes, the excessive buzz the trolling motor makes on high speed, and the fact that you might get hung on the something random while casting and waste more time. All in all, you could actually conclude that you’re doing more damage to the productivity of the area by going fast than all that exhausting behavior is worth.

Now I understand that most of you are not tourney anglers, but there’s a huge lesson to be learned here for the recreational fisherman. If the bass are really biting around docks, then they’re seeking cover, and so should you, and you should approach the cover in the same manner between the docks that you would if making one key cast at a dock itself. You can’t do that if you’re overthinking and overworking. Narrow your focus. I’ve gotten to the point that I would sooner wait and not cast at all when “between” until I see the right opportunity. I may not be keeping a line wet, but trust me, I’m being productive by looking and waiting like a sniper.

That goes for lure choice between the goodies as well. Sure, the process of flinging a spinnerbait may catch a rogue fish off of nothing here and there, but I’ve found that during the course of the average true cover-seeking day, your only looking for a few extra bites from “between” bass. I’d rather be locked and loaded for the gentle pitch, then carelessly unleashing the firing squad. What I mean is that in most cases I’d rather be putting along “between” at a moderate pace with the same jig in my hand that I had success with on the docks all day, and looking for that unique cast/pitch to something that most other drive-by bass fisherman overlooked. It could be in the form of a subtle bank transition that holds a single fish, an old submerged single piling that most guys miss, or even something as simple as the end of a seawall that distinguished one person’s waterfront property from their neighbors. If you slow your internal clock down and think of all that space between as only offering one or two opportunities throughout the day, you’ll actually end up catching more bass focused up on the right stuff.