Man Kicked Out Of Pay Lake For Catching Too Many Fish

[ There’s a pretty good debate wrapped in this news story from WDRB.com out of Kentucky. Austin Curry was fishing... 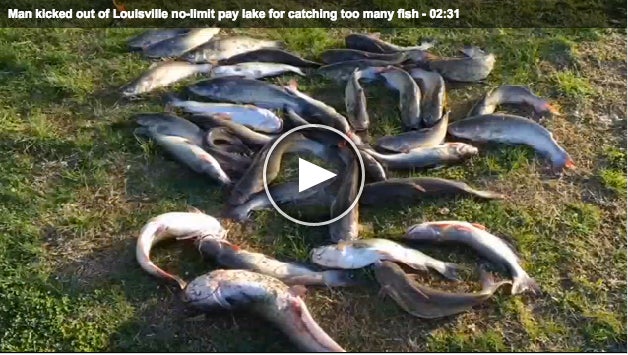 There’s a pretty good debate wrapped in this news story from WDRB.com out of Kentucky. Austin Curry was fishing no-limit Horseshoe Pay Lake. He caught himself a whole bunch of fish. All of a sudden, there was a limit, and Curry was kicked out. At first, given that the co-owner of the lake does not give the best interview, you instantly side with the angler. No limit means no limit, right? And “no limit” is (or was) plastered all over Horseshoe’s signage and tickets. By the end of the video, however, you start to see things differently. The question of commercial fishing comes into play. But at the end of the day, while the lake can certainly go back and change its policies on limits, during the time Curry was fishing, there was, in fact, no limit. In my opinion, regardless of what Curry did or did not do with his catch, you can’t impose a limit on certain guys who really know how to catch them, and not others. For the record, though, what I’m not saying is that I think anglers should take advantage of a no-limit lake. I’m not saying what Curry did was cool, but I also don’t think he broke any rules. Curious to see where you stand on this one. Who’s right? Who’s wrong?