Muskie Basher Apologizes On Video, But Do You Buy What He Says?

Yesterday, I posted about a video that has been making some serious rounds on the interwebs. Two anglers on the... 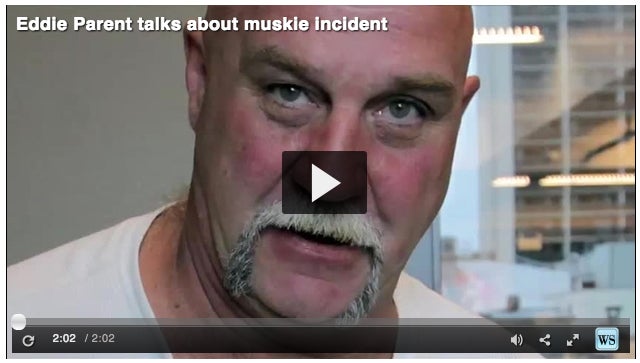 Yesterday, I posted about a video that has been making some serious rounds on the interwebs. Two anglers on the Canadian side of the Detroit River caught another fisherman—who we now know is Eddie Parent—bashing a muskie over the head, dumping it, and then bragging about it when confronted on camera. Views of the original video are soaring, social media has torn Eddie Parent a digital new one, and all of a sudden here he sits on camera in the office of the Windsor Star _explaining himself and apologizing. While Parent doesn’t seem entirely sincere or believable on video to me, the print story reads like this: _”I don’t know, I just blew up,” said Parent, 52. “I don’t want this to look like I’m looking for some kind of a way out because I’m not. I deserve to be punished. It was the wrong thing to do because I made no effort to put that fish back in the water so that it would live. I didn’t think it was going to live anyway, but that makes no excuse for the way I handled putting the fish back into the water.” Parent said the muskie swallowed his jig. When he was taking the hook out, he said it caught his hand. “I swung and hit the side of the boat with it,” said Parent. “As soon as it was in the water, I went ‘aw, sorry.’ They had it on video and it made me look bad. It was bad, I shouldn’t have done it. But it was more of a reaction than anything.” If you haven’t watched the first video, you should do so before watching this one, because like me, you may have some trouble believing Parent’s story. Click here or on the photo below to see the apology video, and tell me what you think.