I guess the tuna laws are a bit different in New Zealand than they are in the States, because around... 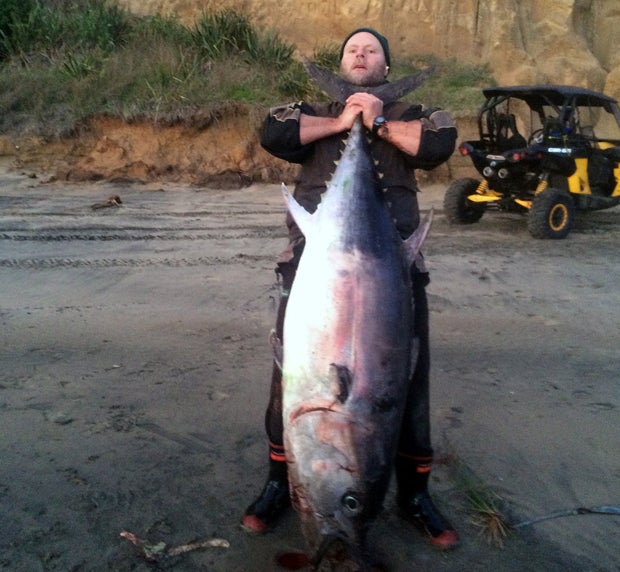 I guess the tuna laws are a bit different in New Zealand than they are in the States, because around here, this stunt would have never flown thanks to permitting and regulations. Still, it’s a different approach to tuna and an interesting story. Per the article on Stuff.co.nz, beach buggy enthusiast Aaron Cossill was driving on the sand when he spotted a giant tuna flapping around in the surf. Eager to secure some tasty steaks, Cossill tried to wrestle the fish in by grabbing its tail, which did not work out. That’s when this “keen pig hunter” opted for the blade.

From the story:
_The keen pig hunter went to retrieve his hunting gear from his beach buggy and returned to find the tide had washed the tuna from the shallows out into waist deep water. Cossill waded into the sea and grabbed the fish. “It was kicking the hell out of me,” he says. “Just as well I took the time to put my hunting gear on properly because when the gills opened, I grabbed a handful, pulled the knife out and stabbed it.” _

He managed to drag the tuna up onto the beach. “I reckon it was sheer adrenaline that kicked in because I would never have been able to get it there otherwise,” he says.

He rang a friend to come and help.

“I was a bit sore the next day because you wouldn’t believe how powerful it was. I’m a keen hunter and I’ve handled a few boars over the years but nothing compared to this.”