No, That’s Not The Bottom. Keep Reeling

Here’s an awesome story out of the great state out Missouri. It’s paddlefish snagging season in those parts, so angler... 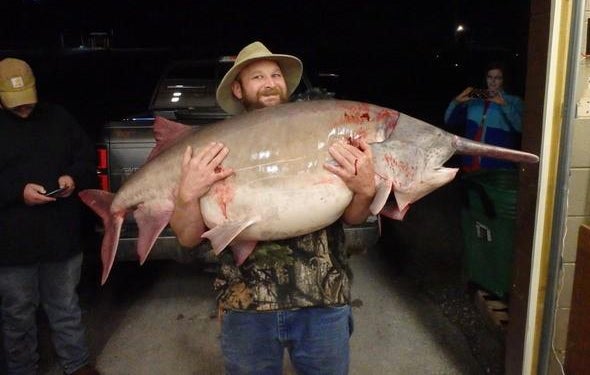 Here’s an awesome story out of the great state out Missouri. It’s paddlefish snagging season in those parts, so angler Andy Belobraydic grabbed his gear and set off for Table Rock Lake last Saturday. According to the article on Theblaze.com, Belobraydic thought he had snagged bottom. Then the boat started getting pulled by what would turn out to be a record-crushing 140-pound, 9-ounce, behemoth spoonbill.

From the story:
It took Belobraydic and two others in the 16-foot boat 30 minutes to haul in the massive paddlefish. Once they had it in the boat, they took it to a nearby fish hatchery, where the Missouri Department of Conservation used official scales to weigh it. Now, it’s just a matter of some time and paperwork before the record is official, the News-Leader reported. The previous record for the biggest fish ever caught in Missouri was set back in 2002. It was also a paddlefish caught in the same lake. It topped the scales at 39 pounds 4 ounces, according to KYTV-TV.

I did a little independent research and found out that a fish that size is probably at least 14 years old, but could be as old as 60. In either case, it’s pretty amazing that it was able to dodge snag rigs for all those years. Wrong time, wrong place for the fish. Right time, right place, right drop for Belobraydic. Hope he likes caviar, because he’s got plenty of it.