On Aging Gracefully As A Bass Angler 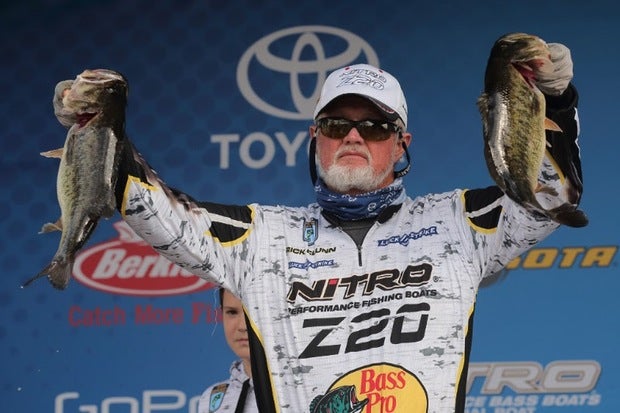 Last week, at age 69, legendary bass fisherman Rick Clunn (left) won a Bassmaster pro event on the St. Johns River in Florida. All of a sudden, the question of how old is too old to be a successful tourney angler sprung up on the interwebs. To set the record straight, Rick Clunn is no ordinary 69-year-old guy that casually takes a spin around his favorite cove with a spinnerbait once a week, or plays a slow cart-assisted nine holes at the local golf club on Sunday morning. He’s in very good physical and mental shape. I’ve fished around him numerous times, and he casts enough in 20 minutes to make a 20-year-old tired just watching him. And he’ll be the first to tell you that his success stems from the cohesiveness of his mind and body working together. All anglers, regardless of age, can learn something from Clunn.

In 2007 I finished second to a then aging Guido Hibdon in an FLW tournament at Lake Champlain. Not only was the fishing tough, but the lake was also really kicked up. During and after the event, I never thought twice about him being too old to beat me, but I still think about what I could have done differently to take the win. Early on in my career, I realized that tourney anglers are really fishing against the fish, not each other, and with that in mind, bass fishing is a sport where age doesn’t matter much, especially when you consider older anglers often know how to fish “smarter” than the young guys.

For example, an older angler might take it slow and not beat himself up running 50 miles in sloppy conditions, but he might also know how to catch more bass in a shorter period of time once he gets there. Likewise, his bank of wisdom might help him out-fish the throttle-punching crew by simply staying local because he’s put in a lot more time, and has a better understanding of using time wisely in a tourney setting. When I was younger, my strategy was to outwork the old guys. Sometimes it worked, but often it did not.

Whether you’re a tournament angler or just a recreational fisherman, you can’t let age hinder your drive, you just have to let it change your approach for the better. Instead of being upset that you don’t have it in you to run 50 miles at warp speed, use that to get better at fishing close. If you can’t throw a giant swimbait all day anymore, don’t. Use that need to slow down to get more effective at fishing a bait you can throw all day, and I promise you’ll figure out new patterns and gain edges you never thought you had. Your personal strategy may not be as chiseled physically as Rick Clunn’s, but at least you have to believe each day that you’re capable of setting a new benchmark. It’s what gets us up at 3:30AM on Saturday morning.