Posting An Out-Of-Season Fish Shot On Facebook? It Could Cost You $250

Here’s a great reminder that your privacy online pretty much means nil. Think only your friends are looking at your... 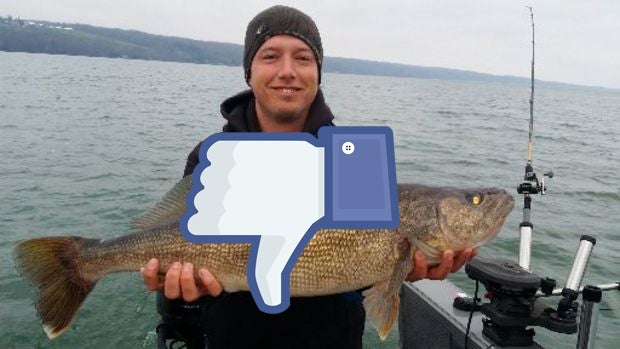 Here’s a great reminder that your privacy online pretty much means nil. Think only your friends are looking at your Facebook posts and Tweets and Instagram shots? That’s just not true, which is why I always laugh when people get nailed for crimes and such because they post shots of their wrong-doing on social media. Now, if you’re a fisherman in New York State, listen up. According to this story on Syracuse.com, NY DEC, as of April 1 of this year, is cracking down on out-of-season fishing by combing the social sites. All anglers obviously should know the rules, and in New York, there are several species that cannot be targeted—period—out of season on certain bodies of water, even if you intend to catch and release. Now maybe you’re trout fishing and happen to smash a 7-pound bass out of season as bycatch. The DEC cares not. If you post a photo of an out-of-season fish on your newsfeed, regardless of circumstances, it could cost you $250.

From the article:
Due to the increasing trend of fishermen catching “out-of-season” fish and posting pictures of their catches on Facebook and other social media, the state Department of Environmental Conservation has put a new fishing regulation in effect that makes the practice a “ticketable offense.”

_”It’s all because of the social media thing and people posing with the fish for pictures. They often spend too much time dilly- dallying and don’t return the fish immediately to the water,” according to Lori Severino, a DEC spokeswoman. “This was designed to protect the fish species.” _

Bottom line: one can’t take an out-of-season fish out of the water for any reason other than to take the hook out and release it. The penalty for holding that fish up quickly or leisurely (it doesn’t matter) for a picture is no longer allowed.

Personally, I think this is a great idea and smart way to adapt to how people share catches and earn their bragging rights. If nothing else, it should make anglers think twice about messing with a fish that shouldn’t be messed with. I wouldn’t be at all surprised if other states follow New York’s lead in the near future.