Like most anglers, I geek out about a lot of fishy things. I’m very into big streamers. I have a... 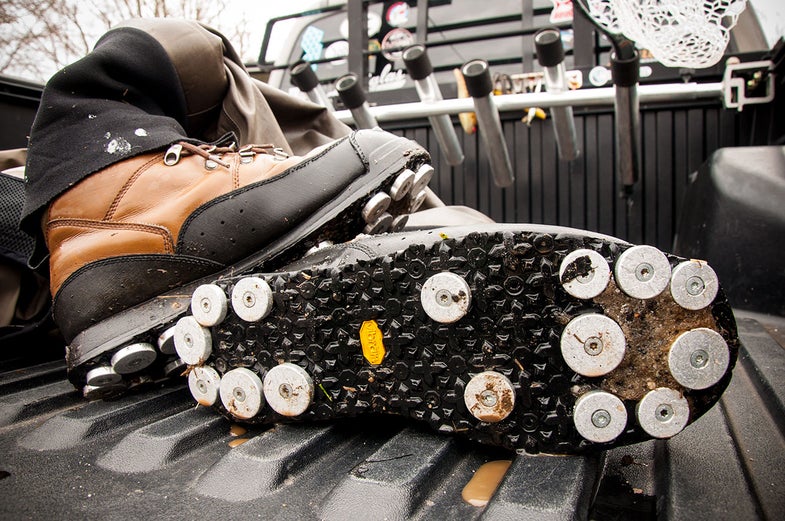 Like most anglers, I geek out about a lot of fishy things. I’m very into big streamers. I have a jones for cool poppers. I love vintage fly reels. I also freak out about wading boot studs and spikes. It’s weird, I know, but considering I’m convinced that if a boot doesn’t have some form of studs, it’s not worthy of wetting, I have tried every new spike, cleat, and bar on the market. I’ve liked a lot of them; others fell short. Now, it’s not easy to completely reinvent a little metal stud, so when I caught wind of Rock Treads (pictured above), I was intrigued. What I figured was that these might be a happy medium between wading boots and boots you can wear safely in a raft or drift boat. Prior to Rock Treads, Patagonia came closest with their bars. The bars grip well and won’t hurt a boat, but they also don’t let you customize their position on the sole, and they only come on Patagonia boots. Plus, when one of those bars comes out, good luck getting it back in. I’ve had Rock Treads on the water for a few months now, and here’s what this geek learned about them.

What Are Rock Treads?: The idea behind Rock Treads is pretty simple. They’re aluminum disks that come in 3 different sizes. Kits start at $50. They also come with long screws and a drill bit to tap holes in your soles where they did not previously exist. How they work is based on 101 science. Aluminum is softer than rock, so they stick and grip instead of slipping, and their shape covers a lot more surface area than traditional studs. On the company’s website, you can find instructions for an easy at-home method of figuring out exactly where to place the disks based on your own feet—ie., if you’re flat-footed, have high arches, etc.

What I Liked: I’m an overly-cautious wader, and even after figuring out where I needed the treads, I added more than necessary. So, although both boots were pretty loaded up, I noticed right away that my feet weren’t heavy. Aluminum is light stuff, so I had nice surface coverage without feeling like there were bricks on my feet. Because Rock Treads are flat, they are also a lot more comfortable to walk on all day than star cleats, particularly out of the water. As for grip, they certainly do that. I waded some slick stuff this winter, doing my best to twist and slide my feet out of position. These things hold fast, so I give them an A for traction. I also think these are a great option for drift boats and rafts. Obviously they’re not going to pop or gouge anything, but if you know you’re going to be hopping out to wade, or even possibly hoping out to shoot a grip-and-grin, it’s nice to know you’ll stick to the bottom.

What I Didn’t Like: Aluminum may be softer than rock, but it ain’t softer than ice. For the record, Rock Treads does not recommend using these on ice—so I’m not talking about ice fishing here. However, sometimes you need to follow an icy trail, or navigate an icy bank to reach the river. I had to do both a few times this winter, and, well, I was using bushes and tree branches as back-up. Although it took three trips, I did end up losing 2 treads. While I think star cleats grip very well, this has always been my issue with them; they grip so well that you twist them right out of your boots. I’ve literally lost half my star cleats in one outing, so Rock Treads are way ahead of the game. I also realize losing a couple may have been a product of reusing holes that previously held studs. This is not a detrimental finding, just an observation.