Six Non-Traditional Jighead Styles You Shouldn’t Be Without

There is no shortage of jigheads on the market these days. I almost feel like every year, some company swears... 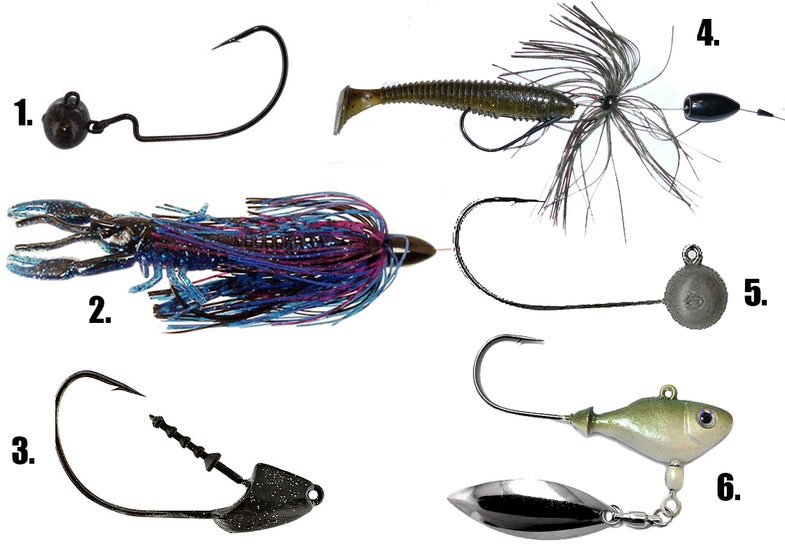 There is no shortage of jigheads on the market these days. I almost feel like every year, some company swears they’ve reinvented the mousetrap in this department. The truth is, in some cases, they have. Many bass anglers give some of these atypical heads a shot once or twice, then shuffle them behind a pile of chatterbaits never to be seen again. In many cases, they were just the “in thing” to buy, but I’ve actually found a permanent home in my tackle bag for some of them, and have learned over the years that they really shine in certain situations. So if you’re the guy that doesn’t see merit in some of these oddball heads, listen up, and keep these in mind when you’re stocking up this winter. 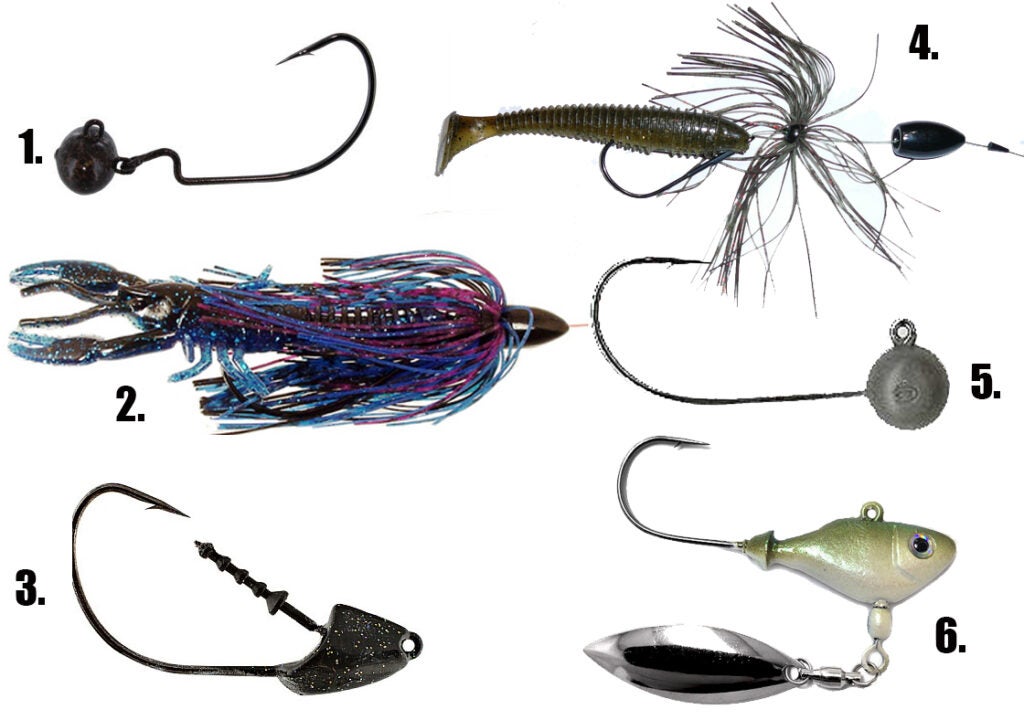 The Swing-Hook These were designed so the hook swings freely of the head (which is usually a football head) and creates a unique action when dragged and hopped along structure, or even flat bottom. The Gene Larew Biffle Hardhead (1) is a good example of this style. Originally, I felt these were a little trendy, but I’ve found they’re not only good with Hula grubs and craws, they’re awesome for dragging swimbaits along the bottom during times of year when the fish are sluggish. Many of my northern buddies light up the smallmouth on the Great Lakes with swimbaits rigged on a swing-hook jighead.

The Inline Though there are many brands of inline jighead available, they’re all intended to create a weedless jig that slips through cover easily. The Paycheck Punch Skirt (2), Fin-Tech Title Shot Jig (3), and Inline Jighead Weight (4) are some of my favorites. The Punch Skirt uses a straight hook with a very heavy shank, making it excellent for pulling super big bass out of super heavy matted cover. The Title Shot is simply a jighead with a flexible retainer that the skirt and plastic lure are threaded on in line with the hook point. Again, the inline option makes it weedless, but in this case, the rig still moves in unison like a regular jig. And lastly, The Inline Jighead Weight gives you the ability to attach a skirt to a bullet weight, giving it a weedless quality, a unique look to its action, and lots of versatility.

The Tungsten Wacky The position of the little tungsten weight on the head (5) not only makes a wacky worm sink faster, but it remains pretty stealthy and doesn’t change the action of the bait on the fall. I caught fish on these as soon as they came out, but wondered if the trend would fade because it seemed almost too simple. It hasn’t. I’ve found so many unique circumstances to apply these jigheads—such as gently tossing one in front of postspawn cruising bass, or slow-twitching one for suspended bass around standing timber—I’m never without them. They are especially killer in super-clear water.

The Fish Head Spin The little blade coming out of the head without the long arm of a spinnerbait makes these jigheads very compact and streamline. Though this is not a new concept by any means considering that lures like the Beetle Spin do virtually the same thing and have been out for ages, a Fish Head Spin (6) with a Fluke (or small swimbait) has revolutionized the shad-centric bass fishing experience. And when bass are on bait schools, the little jighead-spinner-minnow combo is a critical component to my arsenal. From the lightweight rigs for schoolers on the surface, to heavy rigs to fish deep for bass in winter, they just produce.