There are quite a few satellite fish-tagging studies conducted around the world each year. Most of them you’ll never hear... 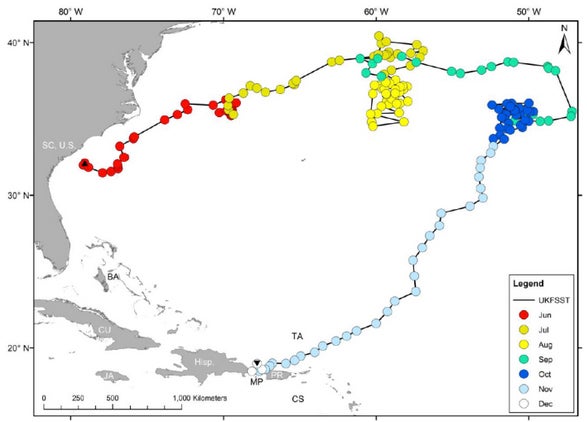 There are quite a few satellite fish-tagging studies conducted around the world each year. Most of them you’ll never hear a peep about, perhaps because the data isn’t very interesting, or because whatever got tagged became shark food within a few hours. But every once in a while, science tags a ringer. Check out this tracking data collected from a bull dolphin tagged last June off Charleston, SC. The full story can be read on Inthebite.com, but I’ll give you the short version of its 8,000-mile journey.

June: After release, the mahi heads straight offshore, staying well out of angler range, and spends the month riding an eddy 340 miles east of Oregon Inlet in NC.
July: By mid-month, the fish is nearly 600 miles east of Nantucket in MA, where it swims 174 miles in a circle feeding within a warm water mass.
August: The mahi spends the entire month 680 miles east of Nantucket, feeding in a zig-zag pattern in an area 132 miles wide by 227 miles long.
September: The fish heads farther offshore, ending up 1,175 miles east-southeast of Nantucket. By month’s end, the dolphin begins heading south.
October: The bull spends most of this month feeding in an area 122 miles wide by 164 miles long, roughly 1,390 miles off Hatteras, NC, before continuing south.
November: The fish decides it’s time to hit the Caribbean. On October 31 it heads due south, reaching the water off Rincon, Puerto Rico, by November 30.

On December 2, the sat tag released, marking the end of the data trail. Still, this was an inredible journey. What I always find most mind-blowing when I see a travel log like this is how catch statistics factor in. Think about how far and wide this one fish swam, and then think about the odds of you being in exactly the right place at exactly the right time to hook it.