What you call a “big” river largemouth is relative to the part of the country you live in. But it’s... 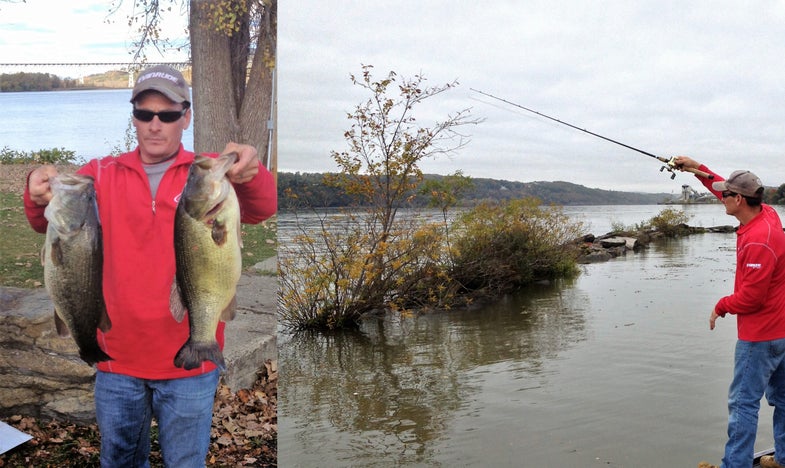 What you call a “big” river largemouth is relative to the part of the country you live in. But it’s safe to say that the two 7 pounders in the photo caught by my friend Nick Radke in New York’s Hudson River would be considered “big” river bass everywhere. I think everyone would also agree that largemouths are more likely to grow to trophy sizes when they don’t have to spend their whole lives fighting wicked current, and in my opinion, that’s the most important thing to keep in mind when seeking a true river bomb. As you can see in the second photo, Nick caught those fish in a nook of totally slack water off the main current. Now for the record, I’m not saying you’ll never find big largemouths in current, but if you’re going to target moving water, take a good look around, because there’s got to me somewhere close by for a big bass to chill when that current speeds up and the going gets tough.

When looking at a river on a topographical map, take the time to separate the river into sections based on the location and size of slack water areas, because that’s where the bulk of the bass are going to hold. Essentially, you want to look at them as mini lakes that just so happen to have a river connected to them. Analyze the depth, structure, size, habitat and forage in each mini lake to make a broad assessment of the possibilities of each kicking out a heap like the ones in the picture. Usually, if the mini lake is deficient in one or more of those major categories, you’ll find a lot of stunted bass.

Now, these mini lakes can come in many forms, such as a backwater pond with a small entrance, the mouth of a slow-moving tributary, the backside of a manmade jetty, an oxbow, a dead-end canal, or even a ship docking station out of the current. Not all of these areas that you find are going to produce trophy bass, but if you fish them on a regular basis, you’ll start to get a better picture of which ones have the potential to kick out a blimp (or two). Once you narrow down the spots that are consistently coughing up decent size quality, you’ll know what to skip, and where to concentrate your efforts.