What Was Your Strangest Wildlife Encounter While Fishing?

Last week while I was on the water here in North Carolina, a nice buck strolls down the bank, takes... 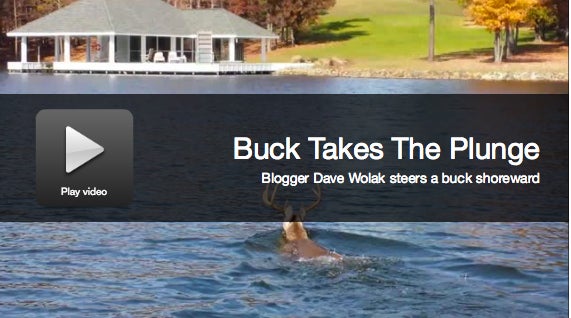 Last week while I was on the water here in North Carolina, a nice buck strolls down the bank, takes a drink, and then plunges right into the lake. For no reason that I could see, he just started swimming directly across at the lake’s widest point, which is pretty wide. I had a gut feeling he wasn’t going to make it all the way in the 55-degree water, so I idled over and nudged him back to the nearest bank (see video). The whole thing was plenty weird, but definitely not the strangest wildlife encounter I’ve ever had on the water.

One time I was running down the middle of large Pennsylvania lake at daybreak and saw a bear with a tag in his ear just swimming along. It was a cold November morning, so much like the buck, I felt compelled to steer the fella toward the nearest island. When he hit land, he shook the water off his coat, and then immediately walked to the other side the island and got right back in the water to keep swimming the same direction. Maybe he smelled something really good on the far shore.

Over the years I’ve had cottonmouths bomb out of overhanging trees into the boat, I’ve had random fish free jump onto the deck, and even a fly-by from a massive swarm of killer bees in South Texas. But of all the weirdness, nothing compared to squirrel I saved from eminent doom. I found him swimming way out in the middle of a Pennsylvania reservoir during a cold fall day. I felt sorry for the little dude, so I idled over and he climbed right up the transom ladder like it was no big deal. Then he walked over and sat next to me in the passenger seat. He just kept his eyes glued forward as I ran to shore, and as soon as the nose hit the bank, he scampered over the bow and into the woods with out so much as a “thank you” look back.

What was your weirdest on-the-water wildlife encounter?