A Table For One

I’d planned to meet my buddy for some bird hunting on the grasslands south of Pierre, S.D., but a late... 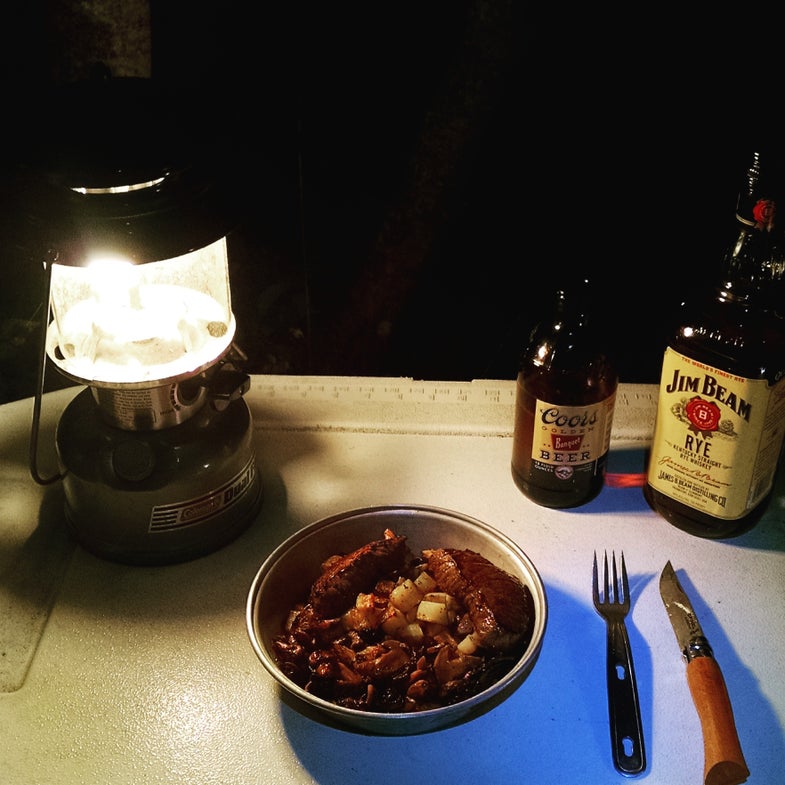 I’d planned to meet my buddy for some bird hunting on the grasslands south of Pierre, S.D., but a late start and dense fog in the Black Hills cut my road trip short. The sharptails would have to wait until tomorrow. Each campground I passed was closed for the season, so before it got too dark I crawled the four-wheel-drive up some dead-end Forest Service road and found a mostly flat bottom to pitch camp.

The fog turned to drizzle as my tent went up, so my next order of business was tying together a lean-to that could serve as a camp kitchen. Earlier, I’d stopped at a grocery store in Lusk, Wyo., and picked up a couple of potatoes, an onion and a few other things. In the back of the truck, a cooler of antelope, barely 24 hours dead, would offer up a few steaks for dinner.

The reliable Coleman sputtered to a start then roared a blue flame. The roof of my makeshift kitchen was too narrow, so I had to crowd the stove a bit. That was O.K. The warmth made my fingers work a little better as I rough chopped potato and onion into a hot pan. Tossed with olive oil, they sent up a steam cloud under the tarp, adding a bit more ambiance to this rough little campsite. A few nips of rye chased with a bottle of Banquet Beer didn’t hurt either.

As the potatoes cooked, I pushed back the hunger with a chunk or two of elk salami, gone soggy from the now-melted ice in the bottom of the cooler. A few more nips eased the appetizer down. The veggies got moved to the side burner and a skillet set over the flame. I sliced a couple of steaks from a rear quarter of the pronghorn and covered them with seasoning. They weren’t in the pan long, just enough to sear each side a deep brown.

There wasn’t room under the lean-to to eat, so I put up my hood and made a place setting on the top of a cooler. A smaller cooler made the perfect seat and my trusty Scout mess kit served as better tableware than any fine china. My only regret is I ate way too fast, partly out of hunger, but also to get into the sleeping bag a little sooner. The dishes would have to wait until morning.