A Wild Take on the Mississippi Roast

In case you haven’t heard, there’s a roast recipe making the rounds that’s apparently the hottest thing on the World... 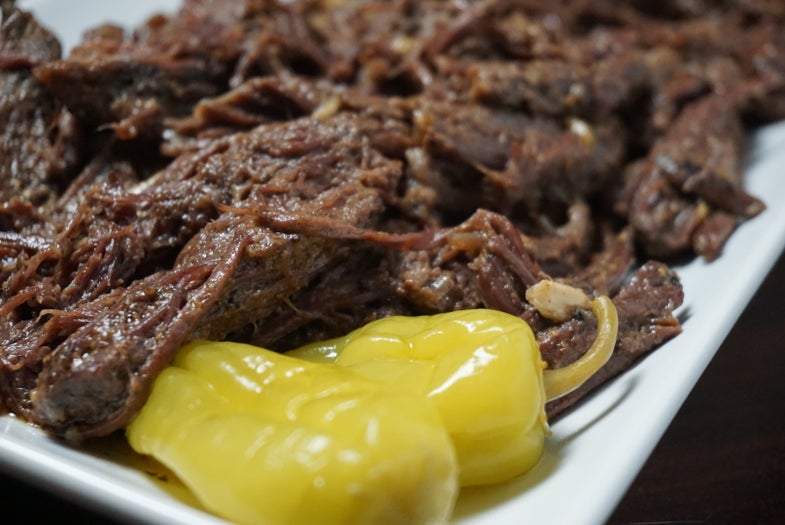 In case you haven’t heard, there’s a roast recipe making the rounds that’s apparently the hottest thing on the World Wide Web since that video of cats freaking out about cucumbers. The recipe is for something called the Mississippi Roast, though it really doesn’t have much to do with the state (or the river) other than it seems to have originated in the kitchen of Robin Chapman of Ripley, Miss. Since then, it’s swept across the Internet fueled by mommy bloggers lauding both the recipe’s ease and rich flavor.

The Mississippi Roast recipe hit critical mass last week when the great Sam Sifton of The New York Times featured it in the paper’s Food section. The article not only gave a pretty interesting history of the recipe, but also an updated take on it. The original called for a packet each of ranch dressing mix and dry au jus gravy, along with a full stick of butter and a couple of pepperoncini. The Times recipe replaces the seasoning mixes with homemade ranch dressing, loses a couple tablespoons of butter and triples the pickled peppers.

I decided to try this unusual roast, though, of course, I had to go a bit wild with it. I started with a blade roast from the elk I shot in Utah last fall, though any large venison roast would do. Sifton’s homemade ranch recipe whisked a couple of teaspoons of apple cider vinegar into some mayonnaise for the ranch dressing, but I thought it made more sense to use the pickling liquid from the pepperoncini instead. I also included the full stick of butter, figuring such a lean cut would need all the fat it could get over the long cooking time. I went the Dutch oven route, but you could certainly do the Mississippi Roast in a slow cooker set on low for six hours or so.

So how did it taste? Admittedly, pretty damn good. And that’s coming from a guy who doesn’t really care for roasts, especially wild game roasts that typically dry out. I think the butter definitely helps keep things moist, and the ranch gives it an interesting tang. It doesn’t happen very often, but mommy bloggers and me agree: The Mississippi Roast is worth working into the weeknight rotation.