_Image from Flickr _ I’ve often extolled the virtues of braising, or cooking meat at low temperature for a long... 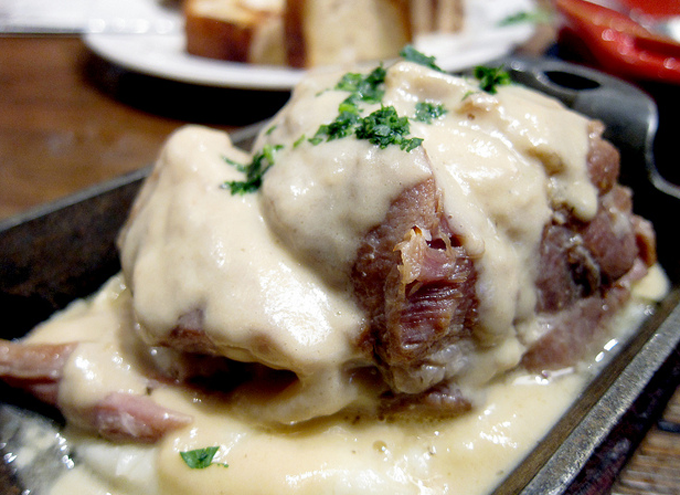 I’ve often extolled the virtues of braising, or cooking meat at low temperature for a long time with just a bit of liquid. It’s an essential cooking technique, especially for wild game. The moisture inside the covered cooking vessel prevents the lean meat from drying out and breaks down tough cuts until their buttery tender. If you’re a Crock-Pot aficionado, you’re essentially a master braiser already, but I do all mine in a Dutch oven, either on top of the stove on a low burner or in the oven at 225 – 300°.

Typically, my go-to braising liquids are a rich game stock, red wine, dark beer or some combination of the above mixed with tomatoes, garlic, anchovies, a mirepoix or other major flavor enhancers. As we approach the long, dark days of winter, which are just made for braising, I’ve been doing some research on other ways to braise. One technique I keep coming back to is a milk braise. From what I’ve come up with, milk as a braising liquid has its origins in Italy (especially when braising pork), though I have to imagine Middle Eastern and North African cuisine puts goat milk to use in their dishes. (And don’t forget braising in coconut milk, which I covered in a venison neck recipe from Tiffany Haugen a few months ago.)

I don’t have much experience braising with milk, although I have used it to cook turkey legs for this milk-and-mushroom recipe from a few years back. That dish wasn’t the best-looking thing I’ve ever cooked as the milk had curdled a bit, but it was delicious. Now, I’m looking at trying a milk braise with a roast from the elk I killed in Oregon last month. I really like the looks this milk and gorgonzola short ribs recipe, substituting some chunks of elk stew meat for the short ribs. But before I tackle that, I wondered if Wild Chef readers had any tips for braising with milk?