Buffalo: The Greatest Meat Man Has Ever Fed On

Sticking with the historical theme from last week, I’m sharing a short passage from Bernard DeVoto’s Pulitzer Prize-winning history of... 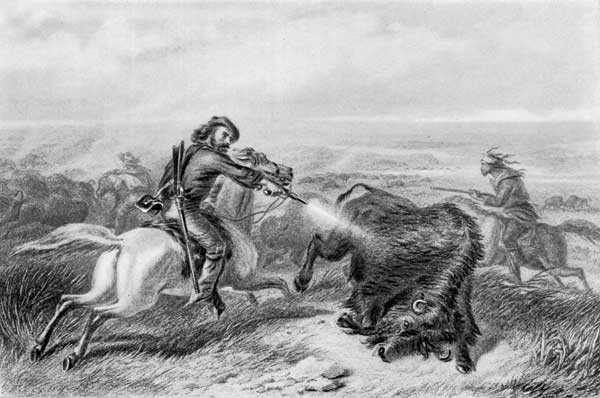 Sticking with the historical theme from last week, I’m sharing a short passage from Bernard DeVoto’s Pulitzer Prize-winning history of the Rocky Mountain Fur Trade of the 1830s. I’m well into the book, which is comprehensive in its coverage of all aspects of the mountain man’s life—from the wild rendezvouses to scalp-tingling (and -taking) skirmishes.

In the first chapter, DeVoto dedicates several pages to the diet of both the fur traders and the Indians they encountered. He goes into great detail about the buffalo—what he calls the greatest meat man has ever fed on—discussing both the hunt and the butchering. In some of the more stomach-turning sentences, DeVoto discusses “high” meat, or that which has been allowed to rot before feasting, and the frontierman’s fondness for “a ten-foot length of raw, warm, perhaps still quivering gut.” Liver and kidneys were also eaten raw and, of course, there was plenty of buffalo fat and grease involved, but, as DeVoto writes leading into the following passage, “The feast was still to come.”

“‘Meat’s meat,’ the trapper said, and he ate what meat was at hand, from his own moccasins, parfleche, and lariats, in ‘starvin’ times,’ on through a wide variety of mountain game, of which some tidbits were memorable to gastronomes—boiled beaver tail, ‘panther,’ and as an acquired taste young Oglala puppy. But when coming out from the states you shot your first fat cow, or when after finding no buffalo for some weeks you reached them at last, you touched the very summit of delight. Nor can there be any doubt that buffalo meat, an indescribably rich, tender, fiberless, and gamey beef, was the greatest meat man has ever fed on. The mountain man boiled some cuts, notably the hump, and seared or sautéed others, but mostly he cooked them by slow roast, skewered on his ramrod or on a stick. Every man to his own fire…and no man with more tableware than his belt-knife—gravy, juices, and blood running down his face, forearms and, shirt.”