A couple of weekends ago, my wife, Rocio, and I took some city friends on their first camping trip. It... 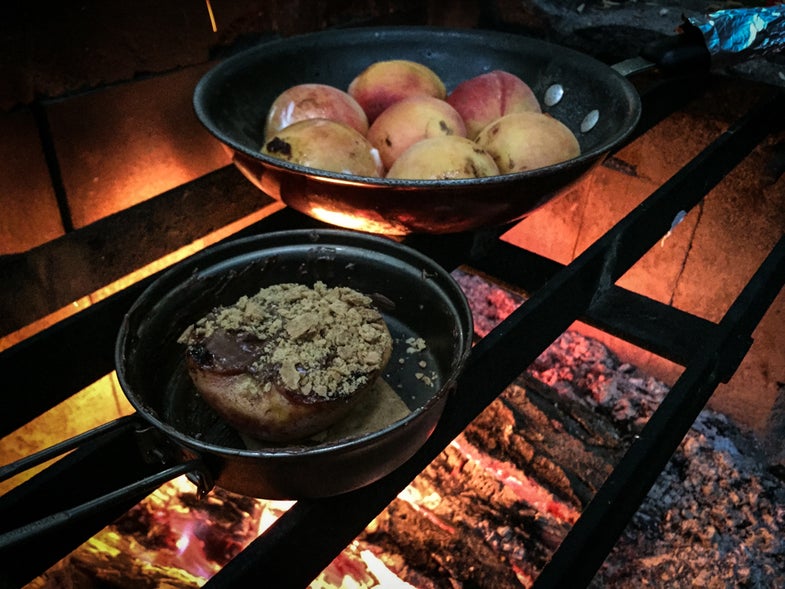 A couple of weekends ago, my wife, Rocio, and I took some city friends on their first camping trip. It was car camping, but our friends still “roughed” it: They slept in a tent, peed in the woods, and ate food cooked over an open fire. Naturally, we had s’mores.

On the second night, my wife got creative and switched out the marshmallow for half of a roasted peach. Try it, and you may never eat a regular old s’more again.

Directions
1. Halve and pit a few peaches, then sprinkle the cut side with sugar and cinnamon.
2. Put the peaches cut-side down in a skillet with a little butter and cook until they’re tender. (Surprisingly, to me at least, this took awhile; 20 minutes or so.)
3. When the peaches are ready, throw them on graham crackers and add your sweetener of choice: We did the classic Hershey’s Bar first, then tried Nutlla, which everyone liked best.

If there is a downside to this recipe, it’s that you don’t get to channel your inner caveman and cook something directly over a fire—that, and the fact that it takes a spell for the peaches to cook. There is a big upside, however: When the peaches are finished cooking, you can wolf down three or four s’mores in rapid succession, to shock and horror of your friends.

Not that I would know or anything…