Grilled burgers are a summer staple, but at nearly all of the cookouts I end up at, it’s the same... 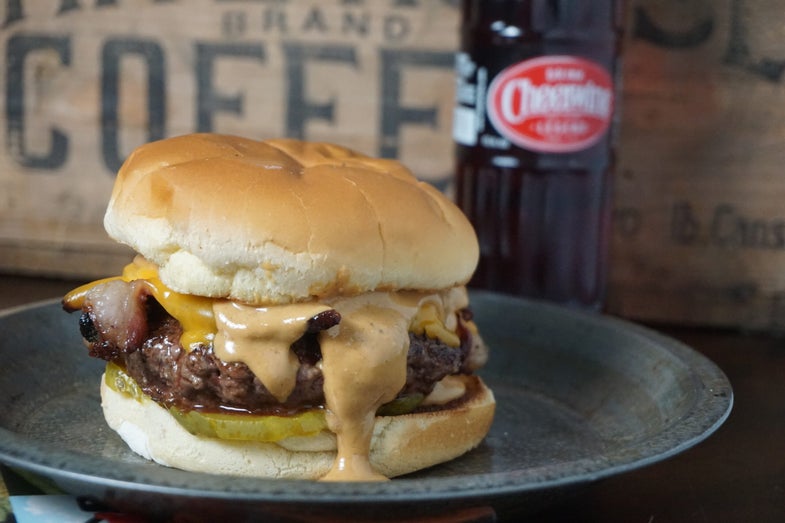 Grilled burgers are a summer staple, but at nearly all of the cookouts I end up at, it’s the same ol’, same ol’—burgers topped with American cheese and, if I’m lucky, bacon.

Now, there’s nothing wrong with a kick-ass bacon cheeseburger, but the combo gets a little old. This summer, I say we mix things up and try some wilder takes on the venison burger. That could be anything from adding kimchi, or as the photo shows, a thick smear of creamy peanut butter. In the past, Wild Chef readers have shown their creativity with secrets to amp up their ground venison, but I thought I’d add to your, summer to-do list with these five ideas for better burgers from your deer, elk or other ground game.

Onion Burger: While I often get grilled onions on my bar burgers, I didn’t know onion burgers were an actual thing, but then I don’t get to Oklahoma too often. Onion burgers are way of life in the Sooner State, and this recipe from Saveur outlines the take on it from Sid’s Diner in El Reno.

Patty Melt: Okay, so maybe a patty melt isn’t technically a “hamburger,” but is it’s a ground meat patty between two slices of bread, so that’s close enough. Right?

Animal Style: Whenever I’m way west of the Rockies, I seek out the closest In-N-Out Burger, which beats Shake Shack, Whataburger, and all those other regional burger joints by a mile. Of course, I order a Double-Double, Animal Style, which features a deluxe burger with mustard cooked into the meat, an extra dab of special sauce, and grilled onions, all topped with crunchy lettuce and a thick tomato slice.

Poutine Burger: Do you like cheese curds, gravy, and fries? Then why not follow the lead of our friends up North, eh? A heavy dose of poutine (and cholesterol) piled onto a venison burger will have you singing Oh, Canada! all the way to the cardiologist.

Pimiento Cheese Bacon Burger: If you must have a bacon cheeseburger, swap the slices of American with a big dollop of the South’s tangy cheese spread. For a true taste, it’s best to find a batch made south of the Mason-Dixon line, but you can make a reasonable facsimile by mixing grated Cheddar, mayo (Duke’s, of course), pimento peppers, and some salt, pepper, and cayenne.