Five New Wild Game Sausages You Should Make This Year

Steven Raichlen is claiming 2015 is the year of the sausage, so I suggest you get on board the stuffed... 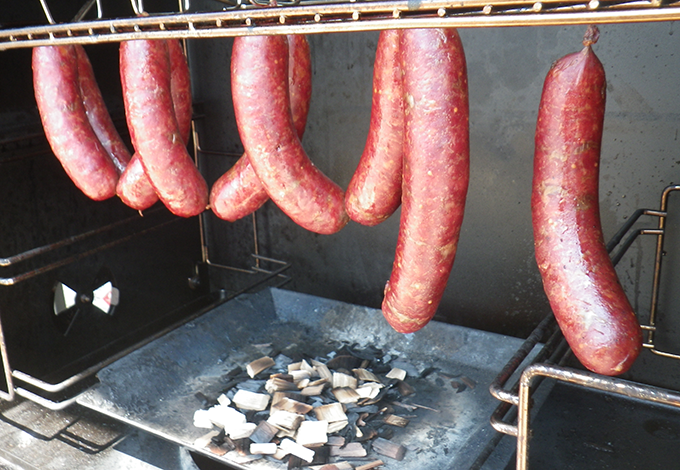 Steven Raichlen is claiming 2015 is the year of the sausage, so I suggest you get on board the stuffed meat train. Most hunters, I think, stick to some well-worn classic when making sausage: Italian, breakfast, bratwurst, and snack sticks. These are all great sausages, and there are no reasons not to keep enjoying them, but it’s never a bad idea to try some new wild-game sausages. The five I’ve listed here aren’t too far off the map, but are still great ways to experiment with new styles and flavors. In addition to these, what other types of deer and elk sausages I should try?

Merguez
From North Africa and typically made with lamb, this is probably my current favorite sausage. I use a standard 70/30 venison to pork ratio (for this and all my wild-game sausages). Harissa is a traditional ingredient but hard to come by in western Nebraska, so I flavor mine with a lot of paprika, cayenne, and sumac. Though not traditional, mine also includes a splash or two of red wine in place of some of the water.

Chorizo
First, you should know there are two types of chorizo: Spanish chorizo is a hard, cured sausage that’s deep red in color and very smoky, while that from Mexico is fresh sausage spiced with chili peppers, cumin, and vinegar. Chorizo and eggs is a regular breakfast at my house. You can watch me make up a batch of it here.

Droëwors
Biltong gets all the glory when it comes to South African meat snacks, but droëwors, a thin snack stick traditionally made with mutton fat, is way better if you can find it. Lucky for me, last time I was over there one of the assistant PHs had a commercial droëwors business on the side and I partook heavily. It’s South African, so of course it has coriander and vinegar in it, along with some cloves and nutmeg. On my trip, I smuggled a bag of Crown National Droëwors Seasoning back to the U.S., but you can also buy it here.

Andouille
If you’ve eaten gumbo or jambalaya, you’ve probably had Andouille, a sausage most associated with Cajun and Creole cooking (though there is also a French variety). Black pepper, onions, and wine are all traditional ingredients, but truth be told, all the Andouille I make (and I make a lot every year) is made with a kit from Cabela’s.

Your Own
The best part of experimenting with new types of sausages is coming up with your own recipe. Like the red wine in my merguez, it can be a riff on a classic, or a whole new take. The key is to experiment in small batches and to test for taste as you go by pinching off a small piece, making a patty and frying it before stuffing.