Although the mercury might not show it, Friday is the first day of spring. We’ve had a few brief signs... 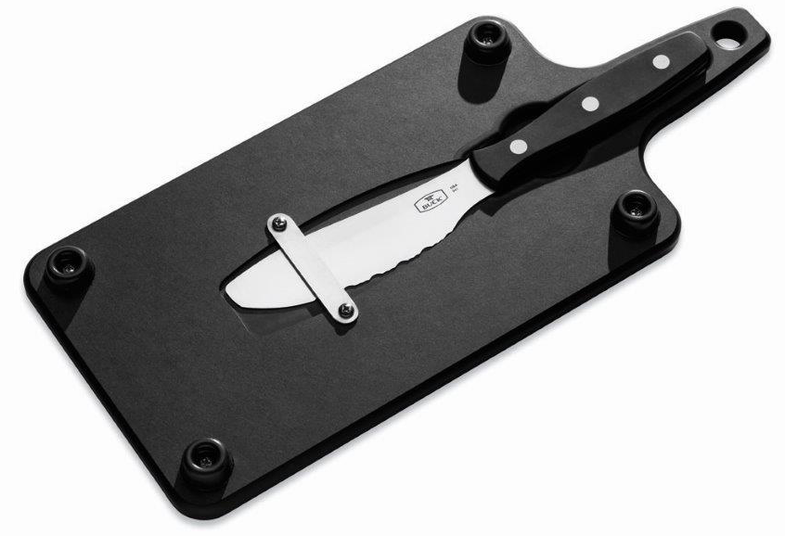 Although the mercury might not show it, Friday is the first day of spring. We’ve had a few brief signs of it here in Nebraska (including an 80-degree day earlier this week, followed by a 30-degree day), and that has gotten me thinking about two things: fishing and camping. For the latter, Buck Knives has introduced a couple of cool new products that are going in my chuck box.

Stowaway Kit
As the name suggest, this cutting board combo has a stash spot underneath that holds the included serrated spreading knife. A magnet and blade clip keeps the knife from slipping out during transport. The nearly 5-inch-long blade is made from 410HC steel, a high-carbon stainless chromium steel that resists corrosion and sharpens easily. The first inch of the blade is straight, followed by a couple inches of wide serrations for tougher cutting jobs—but not too tough. In fact, the steel is thin and has a bit of flex to it, maybe more than I’d like, but it’s perfect for covering a bagel with peanut butter. While it’s not going to replace my chef’s knife, it does make a pretty handy edge around a camp kitchen. The handle and the cutting board itself are made from Buck’s Paperstone, a 100 percent recycled paper material that is durable and dishwasher safe. The kit is available with two sizes of cutting boards: 6×10 inches ($87) or 6×8 inches ($81).

Travelmate
With new-age materials and a modern design, this is a hobo knife for a today’s vagabond. Is it necessary? Maybe not. Is it cool? Definitely. The Travelmate ($77) includes the same serrated spreader knife at the Stowaway, but it’s housed in an injection-molded sheath that is also food safe. The sheath locks the knife in place. It does so loosely so the knife rattles around some, but won’t go anywhere. Locked onto the outside of the sheath is a multi-function fork that removes with the push of a button. The fork can also open bottles and cans, tighten standard screws and scrape your grill grates clean, but one thing it can’t do is scoop soup into your mouth. For that I wish they had made it a spork instead.