How to Cook Venison Tenderloin on a Shovel

A couple weeks ago, I spent some time in old Mexico testing Mossberg’s Patriot rifle on a hunt at Rancho... 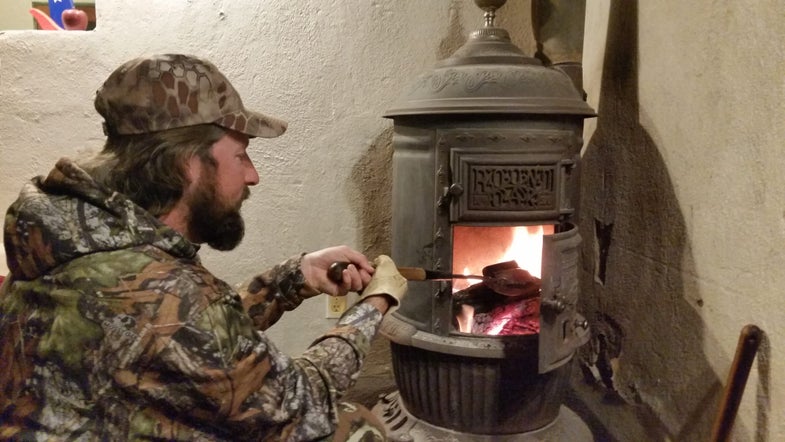 A couple weeks ago, I spent some time in old Mexico testing Mossberg’s Patriot rifle on a hunt at Rancho Mababi. After three long days of glassing, I spotted a buck nosing some does along the side of a steep hill and, with a cross canyon shot with my .25-06, secured my first-ever coues deer.

That night, before dinner, I decided to surprise my friends with an appetizer of fresh coues deer tenderloin. I threw together a quick marinade with what I had on hand, which wasn’t much. Tequila, of course, and fresh limes. I also found some dusty bottles of coriander and cumin and added a pinch or two of each, as well as some kosher salt. A quick whisk of olive oil rounded things out.

The ranch where we were staying on was rustic, and our little adobe cabin was heated with a constantly roaring wood stove. (The Sierra de los Ajos in January is colder than you would think.) I originally thought to skewer the thin slices of meat and roast them over the coals, but then spotted the ash shovel propped next to the stove. All it needed was a quick scrub and rinse.

Once the shovel was clean, I heated it over the fire, then spread on a thin coating of oil. I tried to arrange the fire as best I could so I was cooking over glowing coals, not direct flames, but the oversize mesquite and oak logs made that difficult. Once the oil was hot, on went the tenderloin. The ash shovel wasn’t very big, so I cooked the tenderloin in batches, turning each piece often until it was cooked to a perfect medium-rare. The woodstove was hot, so the meat didn’t take too long—maybe three minutes per side. Once the venison was sliced into bite-sized pieces, it disappeared quickly. Every hunter giving them rave reviews.