How to Finish a Sous-Vide Venison Steak with a Blowtorch

For those of you who have sense enough not to watch all those ridiculous competitions shows that have proliferated on... 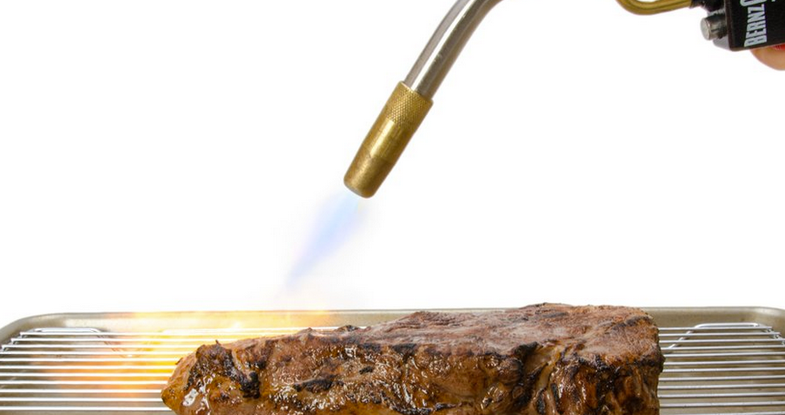 For those of you who have sense enough not to watch all those ridiculous competitions shows that have proliferated on TV in recent years, let me give you a brief overview of sous-vide. First off, sous-vide is French for “under vacuum,” although I’ve always thought it would be more accurate to call it whatever the French words are for “miniature hot tub.” Because that’s what a sous-vide machine is—a glorified, countertop-size hot tub for food.

At its most basic, sous-vide means cooking food in a vacuum-sealed bag set into a temperature-controlled hot-water bath. Sometimes, the bag is left in the water for an absurd amount of time (think days instead of hours). Admittedly, the result is perfectly cooked food, but for a long time I scoffed at the idea. Sure, it’s great for restaurants, but does the home cook really need a tiny hot tub taking up counter space? (Not to mention blowing 500 bucks that could be better spent on guns.)

I still say the answer is no, but the sous-vide venison steak I recently ate did make me question my convictions. It was perfectly cooked to medium rare, had that great venison flavor I love, but most notably, was the tenderest piece of deer I’ve ever eaten. Not mushy tender, but with the kind of tooth you’d expect from an expensive, dry-aged filet mignon. The problem is, the steaks don’t look that great when they come out of the bag, which is where a blowtorch comes in handy. Okay, we did sear ours on a screaming-hot cast-iron skillet, but a torch is way cooler.

For now, I’m going to stick with grilling my venison steaks, but my eyes are now open to other possibilities. Kind of like a slow cooker, the sous-vide machine has the benefit of no-hassle cooking. As they say on TV, you can set-it and forget-it until dinnertime. Sure, there is the cost and the counter space, but there are some great hacks out there in Google-land, including rigging a beer cooler to act as a sous-vide machine and the Sansaire heater/circulator, which is cheaper and smaller than your standard sous-vide.