“If you like things spicy, try those,” said Alice Valenzuela, pointing to a clear jar of small, red chilies, along... 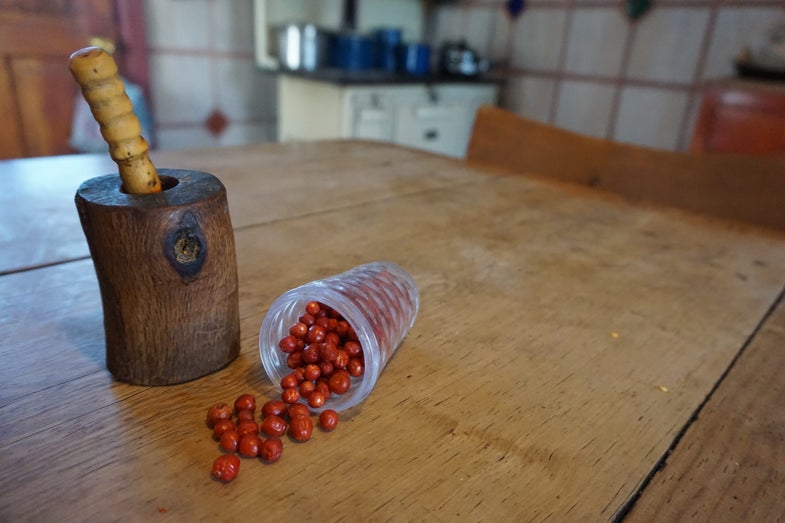 “If you like things spicy, try those,” said Alice Valenzuela, pointing to a clear jar of small, red chilies, along with a rustic mortar and pestle.

“Only one or two”, warned Roberto, Alice’s husband and our host for the week at Rancho Mababi. “And don’t touch them with your fingers.”

I heeded his advice and rolled two in the mesquite-branch mortar. The red-stained pestle was efficient in crushing the tiny, round peppers and sprinkled the resulting dust over my plate of beans and rice. I scooped them into a tortilla and took a tentative bite.

The burn was instant, but gone almost as quickly. None of that lingering heat you get from most pepper—the kind that sears the back of the throat and leaves you in tears. There’s also a pleasant taste I’d describe as something close to citrus and just a hint of smoke. They were delicious, and I added them to almost every meal for the rest of the week, increasing the dose up to four chilies at once. Outdoor Life editor-in-chief and good friend, Andrew McKean, also developed a taste for them and swore they fueled the vivid dream he experienced throughout the trip. But maybe that was just indigestion on McKean’s part.

These peppers, called chiltepins, are unique in that they’re one of the few, if only, chili peppers native to North America. Also known as “the mother of all peppers,” they’re found throughout northern Mexico and the desert Southwest of the United States, though not in great volume. They’re also rarely cultivated, and most are foraged. Thus explains the high cost of the chilies, going for upwards of $40 for a couple of ounces.

We had planned to buy some at the border, where hawkers sell small bags for around $20, but the circus-like confusion of the crossing prevented it. Now I’m jonesing for a hot hit of chiltepin powder and perusing Amazon for the best deal. It’s either that, or wait until I go back for a turkey hunt in April to get my fix of these little ruby gems.