In this serendipitous life I lead, I always seem to find a story—even with I’m just looking for some chain... 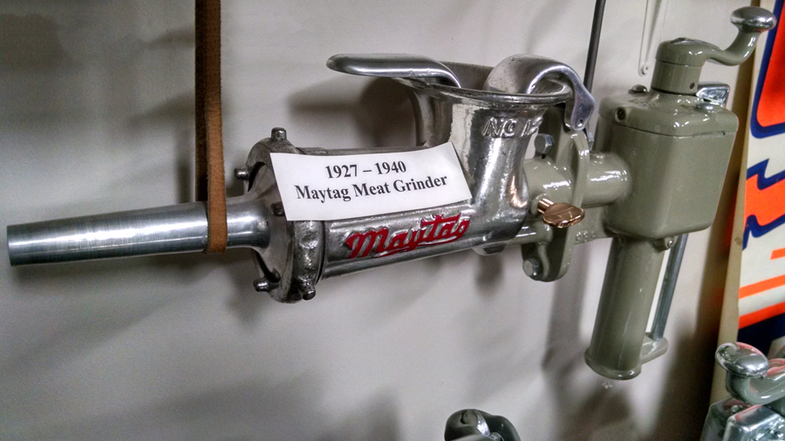 In this serendipitous life I lead, I always seem to find a story—even with I’m just looking for some chain links to repair a 1980s vintage New Holland manure spreader. That’s what I was doing when I stopped by the local machine shop this past Wednesday. I didn’t get the parts I needed but I did get an impromptu tour of the family’s Maytag washing machine collection, which is way more impressive than it sounds. Of all the gems in there, some dating back more than a century, I found one little surprise Wild Chef readers might be interested in: a washing-machine mounted meat grinder.

Two pounds per hour! Two paraphrase another advertisement: We’ve come a long way baby with today’s home grinders able to do those two pounds, and another 48 in half that time. Still, you have to admire the inventiveness of Frederick Louis Maytag and company, who added these two added-value accessories in an attempt to sell washing machines to a generation of harried housewives. Who knew a Maytag was the precursor to the Ronco Veg-O-Matic?

The Maytag Meat Grinder attachment apparently fixed to a post on the automatic wringer and was powered by the same shaft. Not only could you wring the water from your clothes, but grind up some choice venison in the process. Talk about multi-tasking. Add in the butter churn atop the agitator and you could just about make a meal while doing the laundry. For some reason, the meat grinder Maytag attachment wasn’t long for this world. After this issue for Model 31 and 32 washers, the company made one more generation of grinders before discontinuing the line.