For some gardeners, zucchini is the vegetable that grows in abundance. For me, it’s peppers. I grow several plants each... 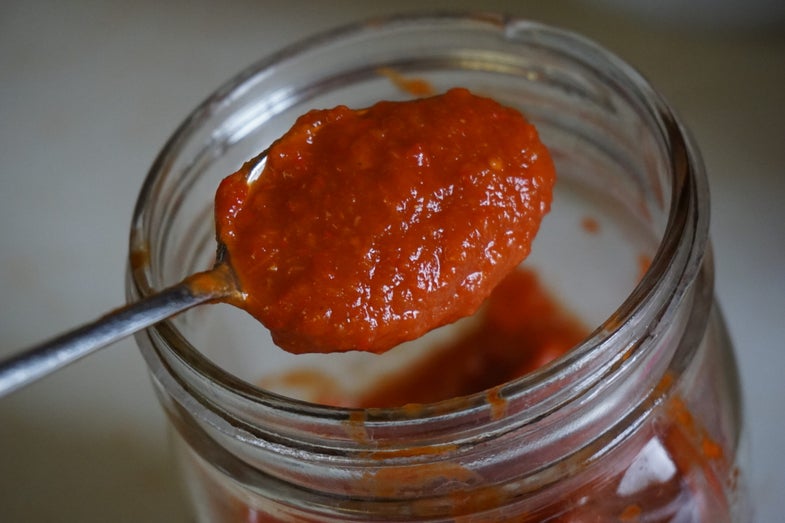 For some gardeners, zucchini is the vegetable that grows in abundance. For me, it’s peppers. I grow several plants each year, and friends and family pile them on me as well. All kinds, too—Super chilies, Anaheim, ancho, Thai. You name it, and I’ll probably have it at some point during the summer and fall. Several flats of chilies strewn across my porch isn’t an uncommon sight in August and September. I like peppers, but at some point I’m at a loss of what to do with them.

A few weeks ago, out of desperation, I decided to try a chili sauce. Now, this was my first attempt, and I was really just winging it. As for the chilies in this batch, they were mostly some dried serranos and cayenne, with a few jalapeños and Anaheim peppers for body. Truthfully, I’m not real sure what all went into the blender, but here’s the basic technique I used. The result was really close to the chili-garlic sauce found in the Asian section of the supermarket. It’s thick and garlicky, with some residual kick that really intensified over the past few weeks in the fridge.

Directions:
1. Stem and seed the dried the dried chilies. This is easier than straining the seeds out at the end. Don’t worry about getting them all, as the seeds do add some heat to the final product.

2. Set a skillet over medium heat and toast the chilies in batches. Turn them often and pull when they just start to show some charred patches here and there.

3. Once the chilies are toasted, put them in a pot and cover with hot water. I like to let them simmer for 15-20 minutes, or until they are reconstituted.

4. Meanwhile, place the one medium onion, chunked, and several cloves of garlic on a sheet pan and set it under the broiler. Monitor the onion and garlic, flipping at they soften. Again, you want a bit of char, not burnt and bitter.

5. Drain the chilies, reserving the liquid, and transfer them to a blender. Add the onions and garlic, too, along with a tablespoon each of fish sauce and sugar. Pour in about ¼ cup of apple cider vinegar and blend. Start adding the reserved liquid from the peppers a bit at a time until you get the consistency you want. You can also adjust the flavor by adding more sugar or vinegar.

6. Transfer the chili-garlic sauce to a jar and refrigerate. The sauce will get better over time.