The Internet is a wonderful thing. Sure, it causes me to miss deadlines because I spend too much time watching... 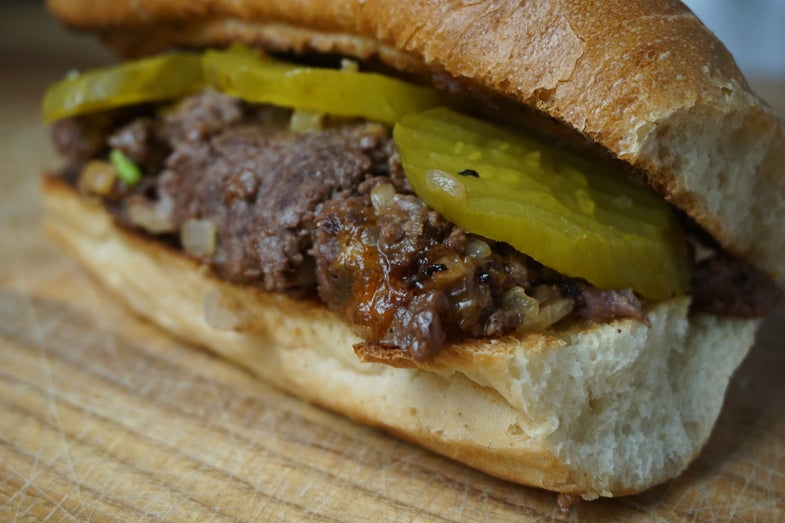 The Internet is a wonderful thing. Sure, it causes me to miss deadlines because I spend too much time watching dogs failing at being dogs and crying laughing at some of the comments on the Field & Stream Facebook page. But without the Internet, I wouldn’t have been introduced to what may be the greatest sandwich ever created.

This Holy Grail of ground meat is called the chopped cheese, and it’s apparently a big thing around certain boroughs in New York City. This is bodega fare. I’m guessing sales of the chopped cheese increase as midnight comes and goes. You don’t need to be under the influence to enjoy a chopped cheese, but I’m here to tell you it helps.

At its heart, the chopped cheese is a simple affair—a cheeseburger deconstructed and elevated. A ground meat patty is fried, topped with cheese, then chopped into greasy, gooey bits that caramelize and turn slightly crunchy on the flat top griddle. That’s the unifying theme. After that, the chopped cheese is up to interpretation when it comes to additives (I go with raw onion) and bun (hoagie roll here). I’m a dill chip fiend, loving them for the vinegar to cut the grease and the crunch. Shredded lettuce would do well too.

East Harlem and the Bronx are a long way—geographically and socially—from the High Plains of the Nebraska Panhandle, but I’d like to think we could all bond over the chopped cheese. And I know Iowans would grasp the concept too, thanks to a grand tradition of loose-meat sandwiches in that state. I may not have much in common with some guy calling himself Bodega Bamz, but thanks to the Internet, our worlds have gotten a lot closer together.

Directions
1. Heat a large, heavy skillet or flattop griddle over medium-high heat. Spread an ample amount of mayonnaise on the inside of each half of the hoagie and place on the griddle to brown.
2. Form the ground venison into a patty approximately the same size as the hoagie roll. Melt a knob of butter on the griddle, then grill one side of the burger patty. Sprinkle with kosher salt and let the patty brown before flipping.
3. Flip the patty and season with ground pepper. Top the patty with the diced onion, then cover everything with a couple of slices of American cheese.
4. Let the cheese melt a bit, then, with a metal spatula, chop the patty into pieces, incorporating the onion and cheese into the meat. Cook until the moisture in the pan evaporates and the meat-cheese caramelizes well. Press the mixture into a patty shape and scoop onto the hoagie roll. Top with pickles and enjoy.