Back in December I had the opportunity to test Remington’s new V3 shotgun on a pheasant hunt at the High... 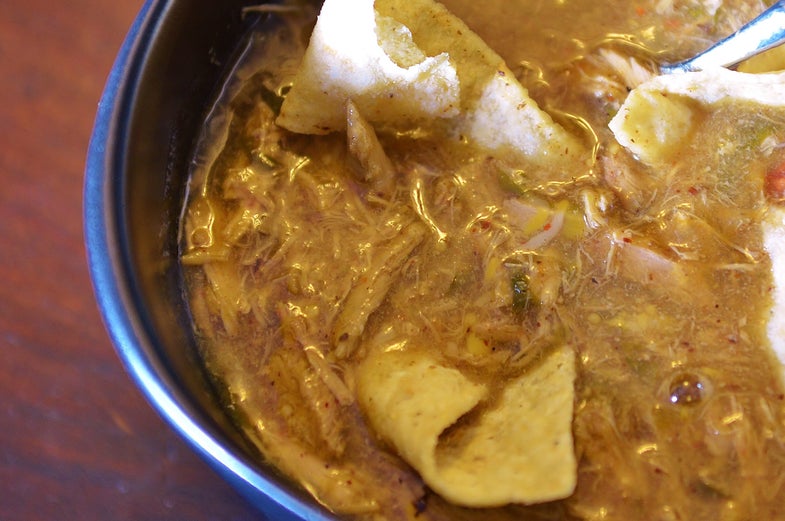 Back in December I had the opportunity to test Remington’s new V3 shotgun on a pheasant hunt at the High Lonesome Ranch near Debeque, Colo. As cool as it was to be one of the first people to use this new autoloader in the field, the real highlight of the trip was Aunt Linda, our cook for the occasion.

Linda Doden, best known as Aunt Linda by anyone who has ever met her, has been the camp cook at High Lonesome for better than 15 years. She’s usually just in charge of breakfast (her homemade granola is seriously amazing) and lunch, but with the chef on hiatus, she took over dinner duties as well. As much as I love fine dining, Aunt Linda’s suppers were more my style and when I tried her tortilla soup, I couldn’t help but sneak into the kitchen and beg for the recipe.

The thing about Aunt Linda is she never slows down, at least not in the kitchen. She was so happy to share her recipe that I barely had time to scrounge up a notepad before she was halfway through the ingredient list—pulled from her memory. Once I started writing, I had a hard time keeping up, but got most of it scribbled down. Linda didn’t provide any amounts, as she’s typically serving a herd of guests, guides, and ranch hands. Since then I’ve done my best to pare her recipe down to just enough for a family. While this might not be exact, I think it’s close enough to name it Aunt Linda’s Pheasant Tortilla Soup.

Oh, and about that Remington V3? As an owner of three Remington Versamax shotguns, I can tell you I’m also a fan of the Versaport-equipped V3, but I’ll leave it to Gun Nut Phil Bourjaily to tell you all about it.

Directions
1. In a large pot, combine onion, celery, carrots, chicken broth, bouillon, and Kosher salt and pepper to taste. Set the pot over med-high heat and bring the poaching liquid just to the boiling point. Add the pheasant breasts, ensuring they are submerged and cover the pot. Turn the heat off and let the pheasant cook in the poaching liquid for 30 to 45 minutes.

3. Once the pheasants have cooked through, remove them from the poaching liquid and shred the meat from the bone using two forks. Strain and reserve the poaching liquid, discarding the solids. Return the meat and the liquid to the pot and set over low heat. Add the roasted tomatoes and tomatillos, along with the next seven ingredients (through the Tabasco). Cook the soup for 40 minutes under a low simmer.

4. Whisk together the masa harina and cold water and stir this slurry into the soup. Cook another 5 minutes or so to thicken.

5. To serve, ladle into large bowls and top with tortilla strips, cheese, and diced avocado.