It’s difficult to narrow down just what the perfect breakfast might be, but it’s safe to say a lot of... 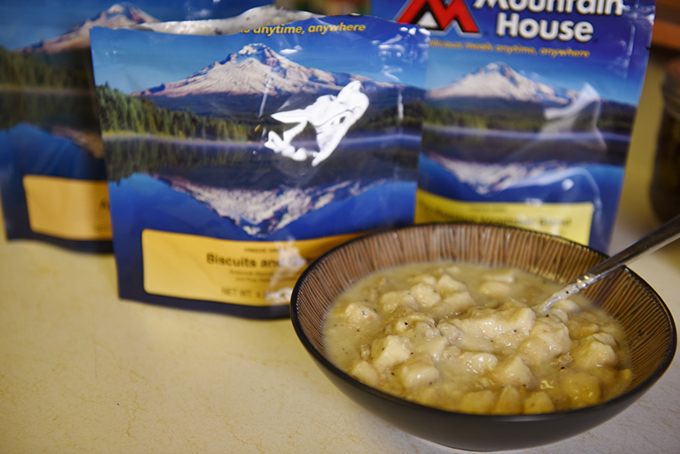 It’s difficult to narrow down just what the perfect breakfast might be, but it’s safe to say a lot of hunters and campers would include biscuits and gravy on the plate. I’m not one to argue that contention either, but when it comes to eating it in the field, who wants to make that kind of mess? Homemade biscuits and gravy takes a lot of work. For those of you Jonesing for a heaping plate, Mountain House has made things easier with the introduction of their new Biscuits and Gravy freeze-dried meal pouches.

As most of your probably know, Mountain House is probably the first name in freeze-dried meals for hunters, campers, backpackers and preppers. In the past, their foil pouches have made up an entire week’s menu for my backcountry elk hunts. Among their wide array of offerings, there are a few hits and misses, but their lightweight and easy-as-boiling-water convenience make backcountry meal planning a snap.

So, how did they do with their new Biscuits and Gravy meal? Surprisingly, very well. Before I tried a sample, I feared the worst. I mean, how were they going to maintain the semi-soft texture of a good biscuit after soaking them in boiling water? Well, I don’t know how they did it, but the biscuit chunks stayed firm, and in a few cases, too firm. I followed the recommended directions of pouring 1 ¾ cup of boiling water into the pouch and sealing it for nine minutes. The package suggests using just 1 ½ cups of water for those wanting thicker gravy, but honestly, I think that would have made for even harder biscuit chunks and with 1 ¾ cups of water, the gravy was plenty thick.

After the nine-minute soak time, I poured the pouch into the bowl. Obviously, you’re not going to get big cat’s head biscuits, but instead they are cut into crouton-like squares. The aroma took me back to grandma’s kitchen and the taste wasn’t too far off – savory with good mix of salt, pepper, sage and maybe some fennel and marjoram. I’ve had worse – a lot worse – biscuits and gravy at chain breakfast joints and even some diners that rely on white gravy powder from a pouch and tubed biscuits. This was hearty, with plenty of sausage flavor. After a few bites, I did add some extra black pepper, but then there hasn’t been a time in my life when I didn’t add a lot of black pepper to my biscuits and gravy.

Now for the downside. Take a look at the ingredient list and you’ll see it’s a bit long with a lot of big words – usually a bad sign, but something you have to expect when it comes to preserved foods. Several of those ingredients include the word sodium, another hallmark of instant or shelf-stable meals. According to the label, the pouch includes “about” two servings of about a cup each. Of course, I ate the entire pouch at one setting. Really, two cups is not that much, but that does equal 1,800mg of sodium or more than 75% of the recommended daily amount in a 2,000 calorie diet. Not necessarily heart-healthy.

If you’re looking for some freeze-dried meals to add to your backcountry hunt, camping trip or just to have on hand in case of emergency, I’ll always recommend Mountain House and will definitely be adding some Biscuits and Gravy pouches to my larder. At a list price of $5.99 per pouch and a street price that’s often more than a buck cheaper, they’re no more expensive than a plate of the same at most breakfast joints and almost as good.