My friends know me well. While I like grip-and-grin photos of fur and fish as much as the next guy,... 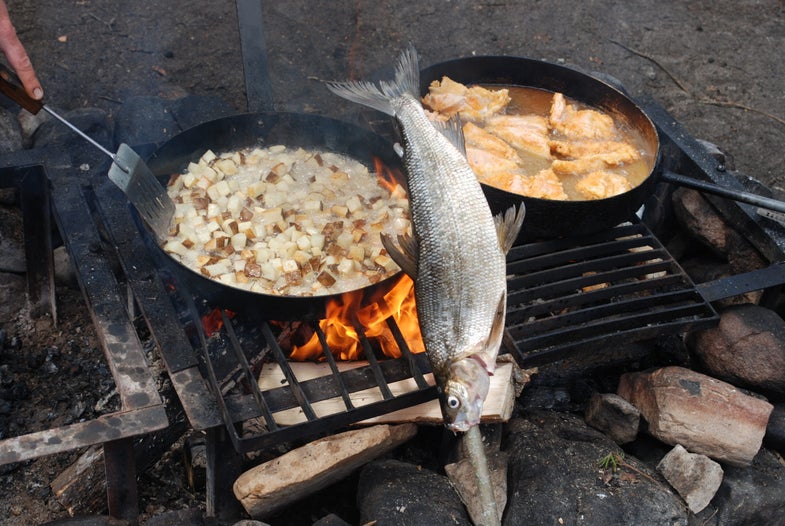 My friends know me well. While I like grip-and-grin photos of fur and fish as much as the next guy, it’s pics and descriptions of the food from hunting and fishing trips that really get me going. So, when I stopped in at Cabela’s the other day to talk to my friend Chuck Smock, it didn’t take long for us to start discussing some good eats. (It didn’t hurt that I was dropping off a chunk of fresh elk backstrap and some roasted green chiles.)

Smock had just returned from a Far North fishing trip to Cree River Lodge* in Saskatchewan, and after briefing me on the giant pike and ghostly grayling he hooked into, he told me all about his guide’s grilled whitefish technique. As you can see in the photo, while the potatoes and pike are swimming in hot lard, John, the guide, would prop a skewered whitefish near the fire. The fish was gutted, but that was all the prep it needed. The smoke and flame did the rest. After about five minutes, depending on how hot the fire burned, John would rotate the stick and let the second side cook just until the fat started to drip, then he transfered the fish to a plate and let the anglers pick it clean.

Smock admitted the fried pike and walleye was the star, but he said that whitefish was pretty tasty, too. From the looks of it, I don’t doubt it. I think the trick would work on other fatty fish, including a nice, fat trout.

*If you’d like to read more about Cree River Lodge and the great fishing and eating to be had, check out _Field & Stream_ Fishing Editor Joe Cermele’s story from his trip there.