Spice Up Your Ground Meat With This Cuban Favorite

Though ground meat, or mince, as it’s known in other parts of the world, is the humblest of proteins, it’s... 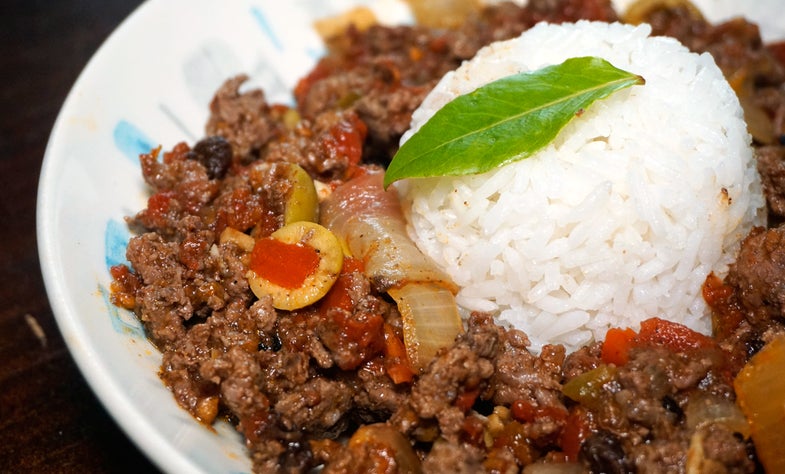 Though ground meat, or mince, as it’s known in other parts of the world, is the humblest of proteins, it’s also the most ubiquitous. Nearly every cuisine offers unlimited mince recipes, and they often form the basis for the most comfortable of comfort foods. For Cubans, that recipe is picadillo—a mishmash hash of ground meat, tomatoes, onions, and garlic, with the sweetness of raisins and the saltiness of olives, plus a host of warm spices, including cinnamon and clove. The act of making it reminds me of my mother’s goulash, even if the flavors are far more exotic. This particular recipe takes its lead from Sam Sifton’s New York Times version, but I stray here and there. Instead of Spanish chorizo—which is hard to come by in the Nebraska panhandle—I add a heavy sprinkle of smoked paprika and let it bloom before browning the venison (in this case antelope, though any ground red meat will do). I also give it a boozy Caribbean kick by letting the raisins plump up in good dark rum, while the rest of the mix stews for half an hour or so. Should you need to bulk it up, consider adding diced potatoes or even chopped calabacín, otherwise known as zucchini.

Directions
1. Heat the olive oil in a large skillet over medium heat. Add the onions, garlic, and a pinch or two of kosher salt. Cook until the onions are softened, which should take about 7–8 minutes. Sprinkle smoked paprika over the aromatics, stir, and then cook for another minute or two.

2. Move the onions to the outside edge of the pan and add ground venison. Raise heat slightly and cook, stirring occasionally, until the meat is browned through. Add the tomatoes, vinegar, cumin, cinnamon, cloves, and nutmeg. Stir to combine. Tuck the bay leaves in the mixture, cover, and lower heat to barely a simmer. Let stew for 30 minutes.

3. Place the raisins in a small bowl and add dark rum. Soak for 30 minutes.

4. Once the half hour is up, drain the raisins and add them to the picadillo, along with the chopped green olives. Let simmer for 5–10 minutes, until the raisins and olives are hot. Serve over white rice and, if desired, black beans.