The Most Important Tool for a Wild Game Cook

Of all the tools in your kitchen, there is one that is absolutely essential for home cooks, especially those of... 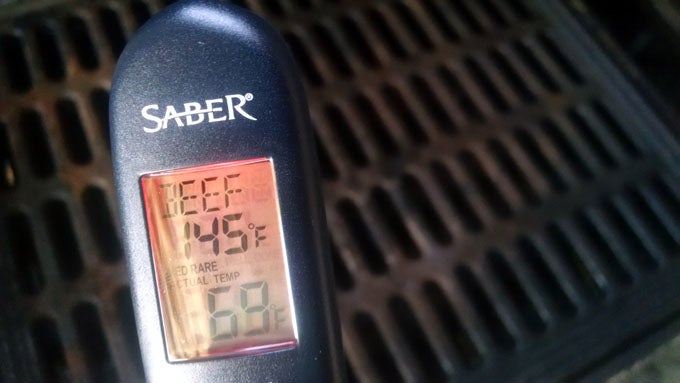 Of all the tools in your kitchen, there is one that is absolutely essential for home cooks, especially those of us who deal in wild game: the digital thermometer. Because nearly all wild game—venison, upland birds, and waterfowl included—lacks the same levels of fat as domestic meat, it can quickly go from tender to tough, from moist to leather, just from leaving it on the heat too long.

That gamey taste hunters complain about? Yeah, that’s usually due to overcooking as well.

The best way to prevent that is with a thermometer, preferably one that returns a temperature as quickly as possible. Bimetal dial thermometers are cheap, but they’re also slow and, most notably, inaccurate. That’s why a digital version is essential. Most of them deliver the internal temperature of the meat in 10 seconds or less, with some of the best models knocking that time down to just a second or two. Quicker is better for a number of reasons: When grilling or smoking, a lot of heat is lost when the lid or door is open. Thinner cuts of meat can also change temperatures rapidly.

Of the digital thermometers on the market, the Thermapen is considered the gold standard. It also costs close to $100, which, if you’re cheap like me, is a deal breaker. That’s why I’ve been using a Polder BBQ Safe-Serve for the last couple of years. With about an 8- to 10-second return time, it’s not as fast as the Thermapen, which truly does deliver an instant read of the temperature, but it’s served me well. You can find them for about $25.

More recently, I’ve upgraded to the Folding Instant Read Digital Thermometer from Saber, the same manufacturer of the grill I’ve been using for the past year. It’s a bit quicker than Polder, with a 5-second or less read time, and more compact, so I can stick it in my pocket while I’m manning the grill. The stainless steel probe swivels out from the handle 180 degrees, with eight positive detents throughout the arc. The operation is simple: Three buttons scroll through the various meat and temperature settings—beef, veal, lamb, pork, poultry, turkey, and a user-selectable setting. An audible alarm can also be set, though I tend to find those annoying. Solidly made, the Saber comes with a 1-year warranty and retails for around $33.