According to reader comments, eating a backstrap any other way than seasoned with salt and pepper and grilled seems to... 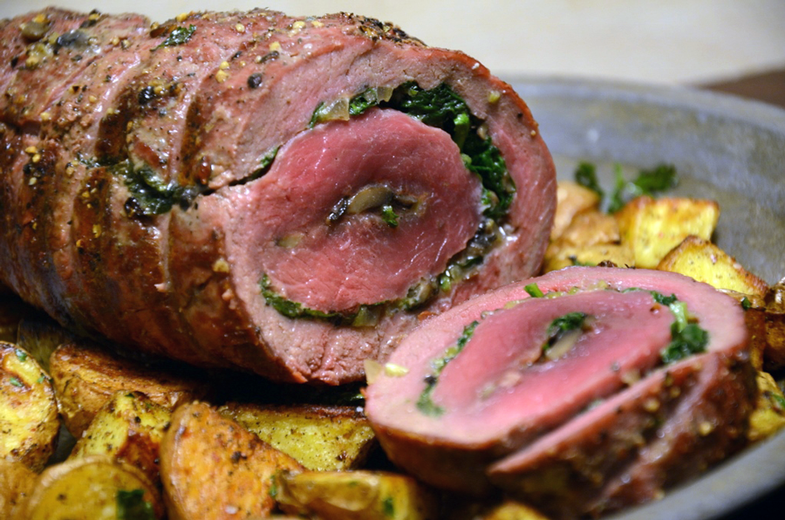 According to reader comments, eating a backstrap any other way than seasoned with salt and pepper and grilled seems to be sacrilege. Any time you suggest slathering it with sauce or stuffing it, the outcry is loud. Still, if you have a good hunting season and have a lot of loin in the freezer, you need to get creative not to get bored with the second best cut of deer (after the shanks, of course). For that, I’d rather stuff than sauce.

There are two ways to stuff a backstrap. Longtime Wild Chef readers might remember a Food Fight Friday where I soundly defeated Field & Stream editor-in-chief, Anthony Licata, with a crab-stuffed blacktail backstrap. (Which might explain why I never get a raise around here. I was never good at client golf.) To stuff that thick chunk of venison strip loin, I cut a long slit into one side of the meat, carefully working my knife to form a deep pocket inside. It was large enough for maybe ½ cup of crab meat and I sealed the hole with some fresh pancetta. The result was, dare I brag, amazing.

Just the other day I found another package of backstrap from that same blacktail. Thank goodness for the vacuum sealer as that two-year old deer meat was in perfect condition. No freezer burn at all. I decided to stuff this one as well, but because it was from the rib loin section of the backstrap, which is not at thick, I used a different technique, called a roulade.

To make a roulade, you need to cut the backstrap into a thin, flat piece of meat. To do this, take a very sharp, thin knife (a filet or boning knife is perfect) and start a roll cut about ¼ inch thick along the bottom of the loin, parallel to the cutting surface. As you make your cut, unroll the thicker part of the meat as you go until you have one large, flat piece of meat. Here’s a pretty good illustration of how to make a roulade.

Try to make the cut so the meat is evenly thick across the whole piece, but don’t worry if you have some thick spots. You can easily pound this down with a meat mallet, or the spine of your butcher knife. Then slather on your stuffing, keeping about a ¼-inch border around the edge of the meat. For this one I used sautéed celery, mushrooms, and baby spinach, and topped it with a little bit of crumbled Maytag blue cheese—just enough to give it a kick, but not so much that it overpowered the blacktail. Starting at one end, roll the loin and stuffing into a spiral (otherwise known as a roulade) and tie with butcher’s twine at ½-inch intervals to hold it together on the grill