Vintage Recipe: How to Cook Braised Iguana with Vegetables

Anytime my girlfriend drags me to an antique store, I naturally gravitate to the book section, specifically looking for vintage... 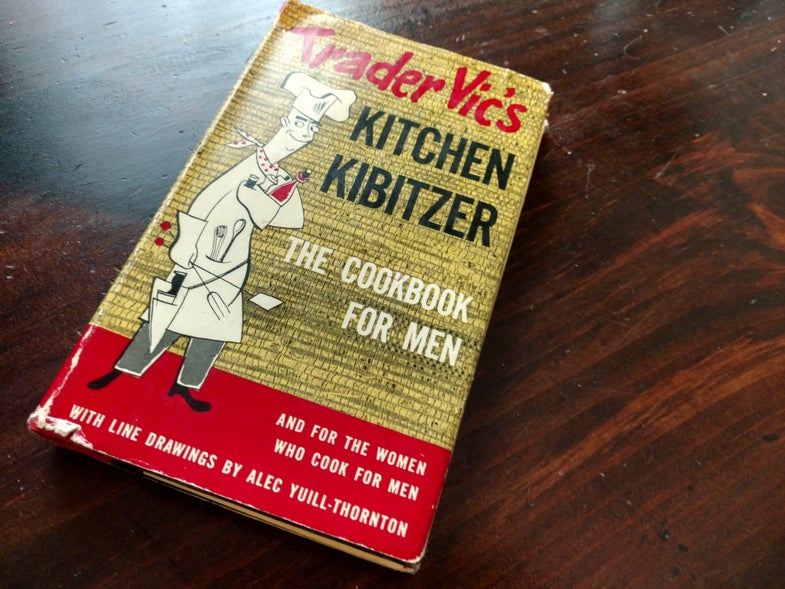 Anytime my girlfriend drags me to an antique store, I naturally gravitate to the book section, specifically looking for vintage cookbooks. My latest find, Trader Vic’s Kitchen Kibitzer: The Cookbook for Men, is a gem. Written by Victor Bergeron, who was both a noted restauranteur and raconteur, the book is a perfect snapshot of its 1950s publication, at the same time hokey and helpful. Like most vintage cookbooks, Trader Vic’s Kitchen Kibitzer includes a section on cooking wild game. Bergeron titles that chapter, For Nimrods, and he introduces it with by writing: “They may not give a damn about cooking anything else, but they’ll argue to the last ditch about the proper way to roast a duck, cook a trout, or make venison stew.”

Apparently, in 1952, iguana was also on the menu, and Bergeron handles the exotic game without so much as a wink or quip. Instead, the recipe comes at you in a straightforward manner. I just wish I would have found this book before my iguana-hunting adventure in Puerto Rico last year.

“Take the required amount of iguana meat, which has been prepared according to the foregoing suggestions, and starting in rapidly boiling salted water, parboil for thirty minutes. Remove from water, drain, wipe dry, roll in flour and fry brown in hot oil or pork lard. When browned, take from the pan and set aside in a warm place until ready to use. Now drain off all but about 2 tablespoons of the oil in which the meat was cooked, place the pan back on the heat over a slow fire and add the following:

“Cook these for five minutes, stirring with a spoon or spatula to prevent sticking. Do not let the onions brown! When the vegetables have cooked five or six minutes, season lightly with salt and lay the meat on top of them. Pour over all enough boiling water to almost cover, put on the lid and simmer gently until the meat is tender. Add more boiling water if the liquid cooks down too much.”