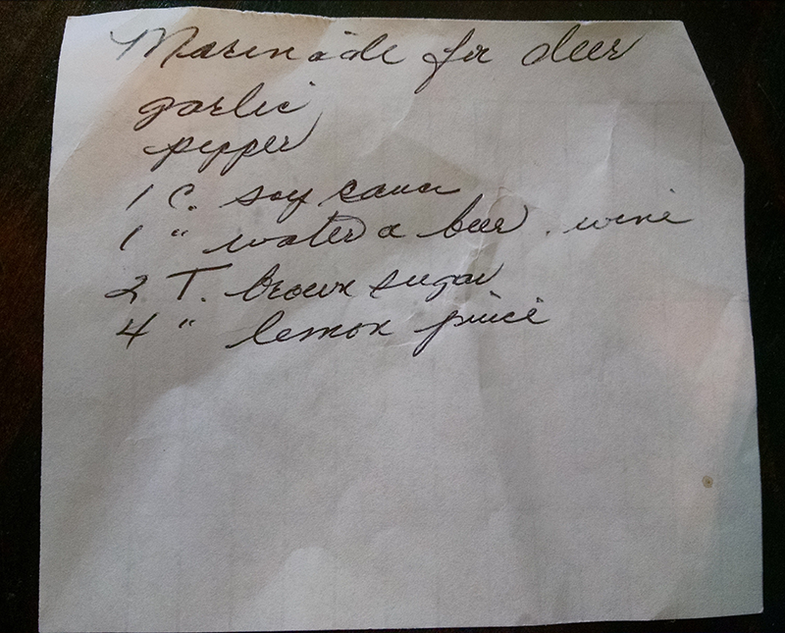 “Oh, you like to eat deer? Let me give you my marinade recipe. It’s the best.”

I can’t tell you how many times I have heard this from people I have just met. It happens whenever someone finds out I cook—and write about cooking—deer and other wild game. Marinades are the one recipe hunters (or often their wives) are quick to share, generally without provocation or request. I’ve had so many scraps of paper foisted on me over the years that I now have a whole folder of them. They’re always passed along with the declaration, “You can’t even tell it’s deer!” or some variant thereof.

And that’s my problem with marinades, and why for many years I stopped using them altogether. They’re generally designed to cover that “gamey” taste that some people seem to have a problem with. Truth is, if you’re deer tastes “gamey,” you have bigger issues. I want to taste the meat when I cook it. That’s the same reason I haven’t bought a bottle of steak sauce in I don’t know how long.

Recently, I’ve started making a few marinades again, utilizing them to enhance the meat or add subtle flavors to a dish. As I’ve written before (LINK: https://www.fieldandstream.com/blogs/wild-chef/2014/03/wild-game-recipe-how-marinades-really-work/), marinades aren’t used for tenderizing meat. They’ve proven to be woefully inadequate at that. This means marinade times can be shortened, often to an hour or less. Once I discovered this, I’ve marinated my meat a lot more. (I rarely plan a meal more than a day ahead, making those “marinate for three days” instructions out of the question, not to mention the resulting meat turns mushy.)

But, I realize hunters and their families love marinades. So, let’s have a contest. Post your best wild game marinade recipe by Sunday, Nov. 7, 5:00 p.m. Mountain Time, and I’ll pick my favorite. The winner will get a cool prize package of stuff from Camp Chef, Cabela’s, and Hi Mountain.

To get things started, here’s the latest marinade recipe I received, in the exact format it was presented. It was given to my mother by one of her close friends. And, of course, the lady said, “My family hates the taste of deer, but with this, they don’t even know they’re eating it.”