Illustration by Yuta Onda A father-son fishing trip in Florida goes anything but according to plan. They wouldn’t have it... 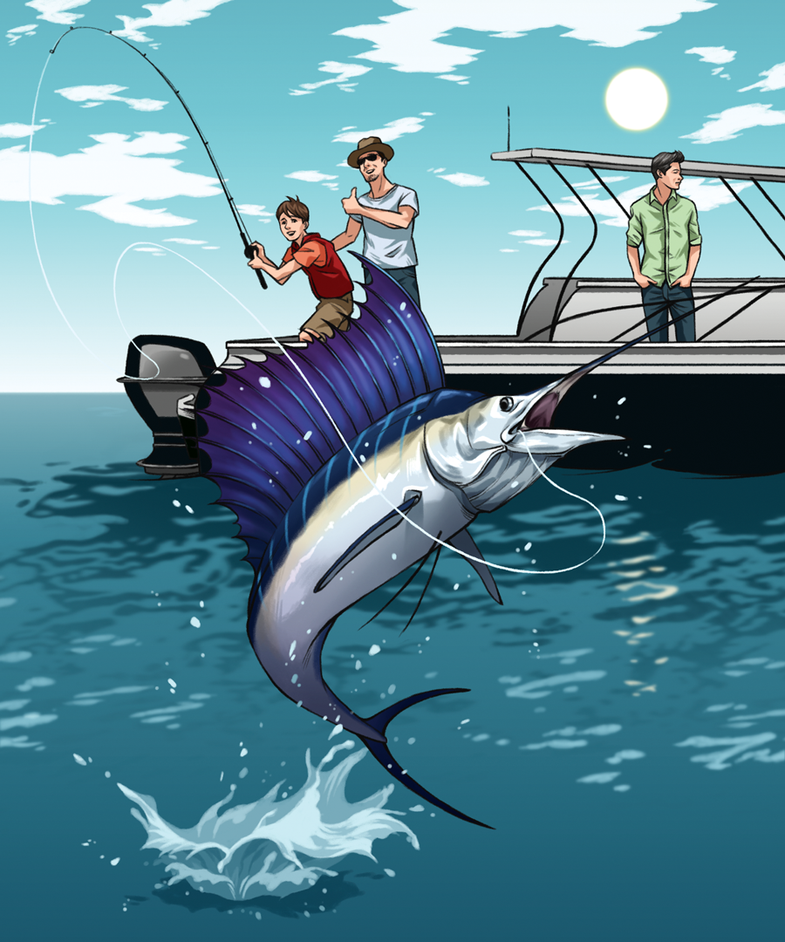 A father-son fishing trip in Florida goes anything but according to plan. They wouldn’t have it any other way.

It’s barely after sunrise, and already I’m outnumbered. From the bow, Capt. Mike Weinhofer throws a 12-foot cast net while my son, Jack, peppers him with questions. How big do sailfish get? What’s the most you’ve caught in one day? Think we can find one today? Weinhofer senses a partner in crime and shoots me a grin. “Well, that’s up to your dad,” he says. “I think he has a different plan in mind.”

It’s hard not to be tempted in Key West. The fishing here can be as over-the-top as the suburban moms hooting it up on Duval Street in their Kid Rock T-shirts. Giant tarpon tail-walk over mirrored flats. Sailfish surf the rollers to slash baits on the surface. For weeks, though, my plan had been to baitfish the Lower Keys’ patch reefs—toss out chum bricks, thread hooks in pilchards and pinfish, and take what comes. This isn’t how you land the postcard fish of south Florida, but fishing a chum slick has a subtle mystery all its own. You never know what might swipe your hook—tasty members of the grouper tribe, mackerel, hogfish, barracuda.

Weinhofer and Jack keep up with their conspiratorial chatter, but I’m sticking to my plans. With the live wells brimming, we point the 40-foot SeaHunter toward the Eastern Dry Rocks. So far, so good.

Son of a Gun
We drop anchor 5 miles south of the nearest T-shirt shop, toss a chum bag off the port stern, and watch the plume of fish pieces billow down tide. In 10 minutes the yellowtails show, and we rig live bait on light tackle. The trick to this kind of fishing is to imagine the slowly sinking chum plume and free-line your baits to fall within the glide path of the slick. With the reel bail open, the line slips out, and the strikes can be aggressive or subtle changes in the cadence of the line ticking off the reel.

It doesn’t take long for fate to choose a favorite. First, Jack lands a gag grouper he can barely hold aloft, then back-to-back fights with Atlantic bonito run him from bow to stern and back again like a monkey pacing a cage. “Man, you are on fire!” I holler, watching the end of my rod, lifeless as a belly-up ballyhoo. Next he loses a nice cero mackerel, then boats another while I stand slack-jawed, 4 feet away. Jack catches fish for a solid hour. We’re using the same kind of rod, same bait, same everything down to the knots.

“Dad, this is crazy!” he says. Weinhofer is cackling. I can’t buy a fish. When I finally get a bite, I pull in the front half of a bloody pilchard. Close, but no red snapper.
Weinhofer winces as I shake my head sheepishly. “Jack,” he says, “it sure was nice of you to bring your daddy fishing.”

Throughout the action, Weinhofer keeps checking his text messages like some middle-school girl at the mall. His buddy Steve reports four sailfish in his lines, but he didn’t have any live bait on the boat. Our live wells are black with baitfish. I don’t want to throw in the towel yet. My luck on the reef could turn at any second.

“Can we please go sailfishing, Daddy?” Weinhofer whimpers. “Please?” Behind him Jack holds his hands together in mock prayer, mouthing a silent Yes, yes, yes! It’s bad when the guide is whining.

I nod. If I have bad mojo with the reefers, we may as well hunt big game.

Pop Goes the Sailfish
It doesn’t take long. Running a color change, we scatter flying fish like quail, then spot a pair of frigate birds coursing low over a weedline, beaks glinting with fish. The sonar is spackled with blips of reds and yellows. “This is it,” Weinhofer says. “Look no further.”

Weinhofer clips a sailfishing kite to a line running from an electric reel and sends the airfoil aloft. We wire a ballyhoo to a circle hook and snap the rod line into a release clip on the kite cable. Out it goes. The kite sails 200 feet downwind and keeps the bait swimming on top. In 10 minutes we have a pair of kite baits in the water. Four minutes later, Jack’s line pops the clip and his rod goes double.

This sail goes by the script, clearing the ocean in violent leaps. Any angler’s first big-fish fight is hard to beat. Matching wits and muscle, you feel this other creature’s wild, frantic will to live in your arms and back and the pit of your belly. Jack screams with each jump, then grimaces as he goes to work on the rod. Weinhofer is right by his side, hand-feeding him Cheetos, punching his bicep while Jack bears down on the rod. When the fish sounds, he taunts Jack, “Less whining! More winding!” The three of us laugh when the sailfish rips line against the drag. It’s hard to tell which one of us is having the most fun.

When the sail has had enough, Jack winches it to the boat. Weinhofer warns him to be aggressive, to grasp the bill with a boxer’s jab and hold fast. But the sailfish sees Jack’s hand coming, and at the last second slashes violently, raking Jack’s outstretched arm with a 2-foot bill. Jack doubles down, makes a second grab, and holds on to the sailfish with a death grip.

The smile on his face is the biggest I’ve ever seen. It’s the postcard moment—a big fat exclamation point to the fact that nothing about this trip went the way I’d planned, and thank the fish gods for that. We grab a couple of quick photos and release the sailfish as its flanks turn from silver and red to gold. Only then does Jack hold up his arm. A half foot of flesh is nasty red and oozing, as if it had been worked over with a rat-tail file.

He doesn’t answer, just looks down at the bill rash. “Man,” he says, “I hope that leaves a scar.”