Float Tube Fishing for May Bluegills

A couple of weeks ago I put the hurt on some serious copperhead bluegill. These fish were deep, skulking in... 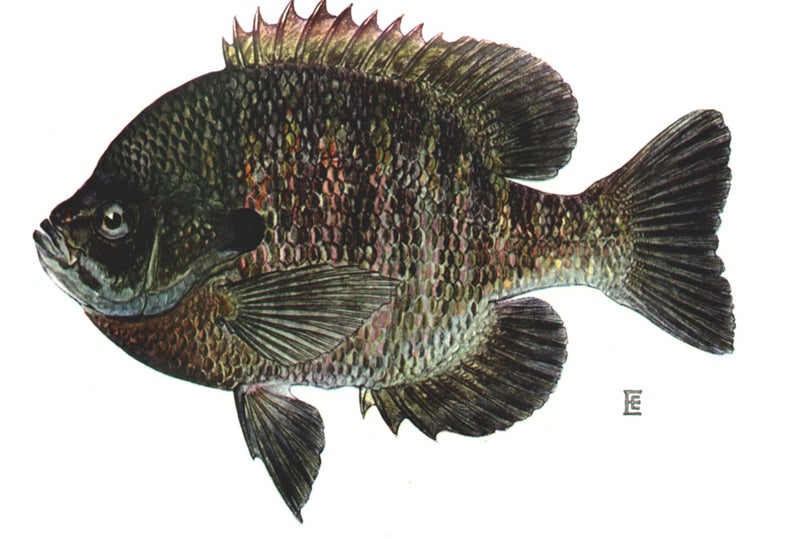 A couple of weeks ago I put the hurt on some serious copperhead bluegill. These fish were deep, skulking in a creek channel in 8 feet of water, and I had to dredge them up with Charlie Brewer’s Sliders fished so slow I had to slap myself to stay awake. I landed 3 in a row within 2 ounces of 2 pounds, but none that broke the barrier. That’s okay. May is here tomorrow. May is the special time. And bluegill flyfishing out of a float tube is the dandiest way to fill a stringer.

I’ve stepped up from my first float tube, which was a truck tire inner tube to which I lashed a boat’s throwable float cushion for a seat. Ouch. My current model isn’t a doughnut, but a U-shaped tube for much easier entry and exit, and the ends of the “U” serve as tiny outriggers, dampening the back-and-forth rocking motion that results from flycasting. I strongly suggest not only a set of fins, but a set of float-tube-specific fins, which are made to fit over stockingfoot waders or bare feet. Mine have a slight uplift at the toe, which helps in walking, but I still turn around and trudge backwards to get to the water.

For a quick May afternoon bream pond slam you don’t need to tote much gear. I stick Betts’ poppers, Tellico nymphs, and black and cinnamon ants in a small piece of ripple foam and zip them into an accessory pocket on the tube. I carry hemostats, a cheap nylon fish stringer, a single roll of spare tippet and I get out the door.

When I was younger, and more apt to push the boundaries here and there, I’d hike my float tube and a pair of waders into a nearby state park, where a small pond held some of the biggest bream and most consistent fishing I’ve ever enjoyed. Once a young park ranger found me happily bobbing a dozen yards from the bank, and called out that there was no swimming aloud. I knew this, of course, and I’d rehearsed my reply. “But I’m not swimming!” I explained. “I’m dry as toast.”

“Well, you’re not allowed to boat, either,” he said.

“But I’m not boating,” I protested meekly. “Heck, I’m halfway in the water.”

He just laughed and shook his head and headed on down the trail. I think he was impressed with my ingenuity. Either that, or he had a float tube back home in his garage.