Go It Alone: One-On-One with an Old Loner Buck

Illustration by Orlin Culture Shop The old-timer stepped halfway out of the river cane thicket, where he’d retreated to lick... 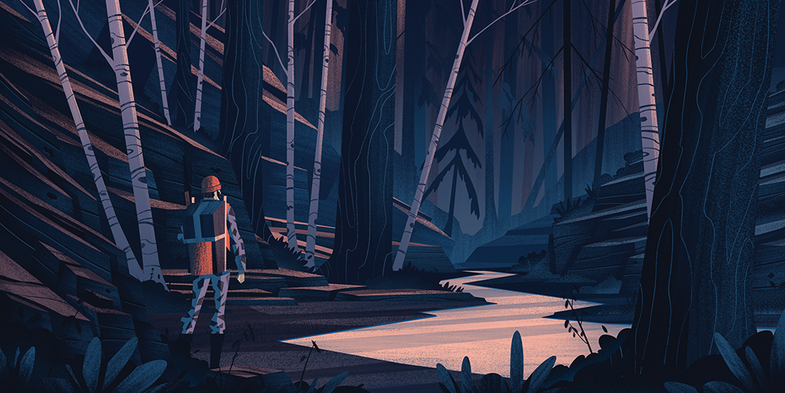 The old-timer stepped halfway out of the river cane thicket, where he’d retreated to lick the wounds of the rut. He was alone and reluctant to commit to full exposure. He’d found a welcome sanctuary. The deer looked up the swamp creek and down while I held my breath and narrowed my eyes, but his gaze never settled on my tree. I watched him angle out of the thicket and take a few tentative steps toward the creek. He was in the open now, and I had a bit of time. So I watched. When the old buck put his head down to drink, I eased the rifle to my shoulder and found him in the scope.

Three hours earlier, I had left the house, alone as well. I drove to the farm, shouldered my daypack, and made my way through the black-dark woods. I found the cat-eye thumbtack that marked the turn toward the swamp, found the tree, and climbed it, all alone. Walking to the stand in the dark cleared my mind of deadlines and overdue bills. Solvitur ambulando, St. Augustine called it, this mystic healing power of movement. It is solved by walking. In the tree I pulled up my rifle and took a deep breath, listening to my heartbeat downshift. I could hear scattered bird calls in the predawn glow, the drone of insects. That was it. All there was. Me and the dark.

By now we hunters have had the work days, the opening days, the doe days, the rut days, the late nights, the poker nights, the big times at camp. I love the companionship of deer hunting, the camaraderie of hanging stands and clearing shooting lanes. But by now, I’m ready for some time to myself.

Alone, whatever happens is on me. To fidget or not, shoot or not, hit or miss, the blood trailing, the dragging—it’s all what I make of it. I love all the rest, but this is what gets me up in the mornings, all alone.

Two of a Kind
A solitary buck, a big buck, this late in the season, had plenty of reason to go it alone, too. The last month had been exhausting, I suspected. He was big enough to have his pick of the does but not without the constant challenge of other bucks that believed their time had come. He walked stiff-legged up the creek. He looked tired and slightly beaten. He had a sag in the belly and was gray around the muzzle. When he turned his head I could see the perfectly symmetrical 8-point rack. He stood there for a long pause, as if gathering his strength. I watched through the scope, my finger off the trigger.

A few months ago, my buddy Scott and I had put this stand up together, and it took us nearly an hour and a half to muscle it into place. The trunk was gnarled with knots and branches. We had to cut our way up the tree, above the canopy of greenbrier and cane, climbing with a linesman’s belt, and raising the saws and then the stand with pulleys. We worked together, but all along we knew this was a good place to slip in quietly and go solo.

The buck turned to walk up the creek, through low, winter-dead weeds, quartering away. I’ve daydreamed about the next few minutes for many hours since: While it seemed as though he walked forever, looking back, moment by moment, I realize I didn’t have much time at all. I could hear the gloppy muck sucking at his hooves. He had a front-shoulder limp, worsened by the mud, so he was in no hurry. There was a good 40 yards of clear creek bank in front of him, before the trees closed in, and now that he was in the open and I could see the wide rack, my pulse pounded in my heart, hands, and chest. The old-timer’s unhurried demeanor made it worse. I could have shot that buck a dozen times—should have shot that buck long before now, before his saunter up the creek unleashed a torrent of adrenaline. But still I held my fire, and watched him walk.

The creek hooked to the left, and so did the buck. I held him in the scope for what seemed like a very long time, until I knew it was time, knew that if he took another step the angle wouldn’t be right and I wouldn’t feel good about the shot. I touched off the trigger. He never took another step. On the ground, he kicked once, then lay still.

Lasting Image
He was the biggest buck I’ve taken in 14 years on the farm, but there were no war whoops, handshakes, or empty platitudes for someone else’s camera. Alone, I sat in the stand as my heartbeat softened. The climb down, the drag out, the telling and retelling, the cellphone photos—all of that would come, and all of that could wait. I kept the rifle on the shooting rail and my eye in the scope. I knew these few moments wouldn’t last, and I didn’t want to disturb the quiet, as if it were a startled bird that at any second might flit away. So I sat in the stand, looking at the buck. Just the two of us, alone.

I whiffed on a big buck last year because I hesitated to shoot. As I estimated the chiropractic bills of dragging the deer across a 20-foot beaver dam all by myself, the buck had just enough time to slip into the brush. That won’t happen this year. I’m packing a compact cable hoist ($48; northerntool.com) in the truck so I can drag deer over gullies and across creeks without calling for backup. Or an ambulance.—T.E.N.