Spring Shad: Are They Here Yet?

Illustration by Mark Smith We know it’s early—we know the fish won’t move into the creeks and rivers in numbers... 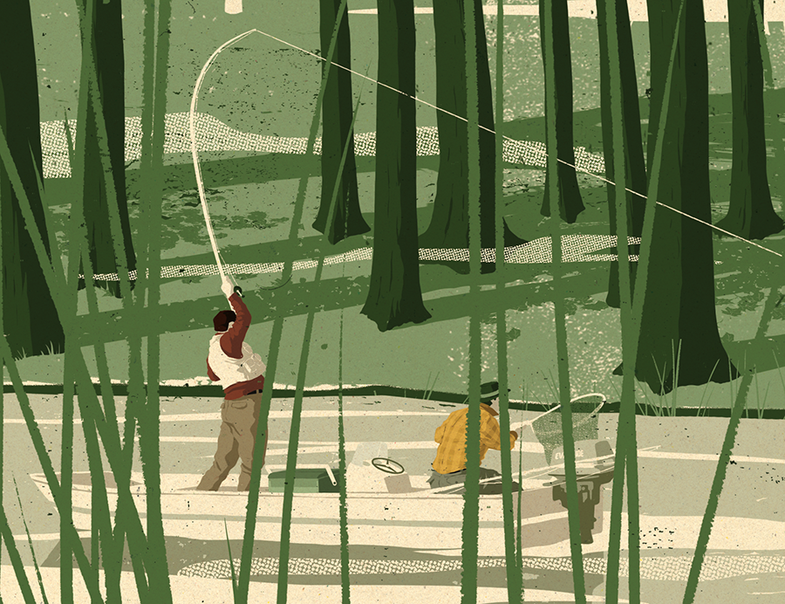 We know it’s early—we know the fish won’t move into the creeks and rivers in numbers beyond imagining for another few weeks—but we aren’t ones to wait. The old-timers say the hickory shad start migrating when the dogwood buds are the size of a squirrel’s ear. The fish gather at the mouths of Atlantic coastal rivers before heading upstream, many of them traveling hundreds of miles to spawn in rocky freshwater shallows. But with the first warm February day, Scott Wood and I get the itch to fish. He and I have burned many hours during the last dregs of winter, chasing the first of the hickory shad to jump-start spring. Wood cranks over the 25-hp Evinrude. She never fails. We’re fishing.

Little Big Fish
Hickory shad are the redheaded stepchildren of the fishing world. They’re in the same family as fish more commonly thought of as bait down South, such as alewives and sardines. You can hardly eat them, they’re so bony and oily. At 18 or 20 inches, tops, hickories are smaller than American shad, which can grow to 7 or 8 pounds and attract huge numbers of anglers. Hicks are found from Florida to Maine, but they’re most common in the Carolinas, Virginia, and Georgia. And they’re only around for a couple of months. While the catching may be sporadic in the early days of the run, these are fish not easily forgotten. Strong enough to survive Atlantic tides and an epic migration, hickory shad will bend a light spinning rod practically tip to butt. On a 4-weight fly rod, a grow’d-up buck shad, as they say in these parts, is a fistful of lightning, surging deep, running with the river current, then leaping with a fervor that’s earned hicks the nickname “poor man’s tarpon.” When the hickory run is on, however, the fishing is on fire. Anchored in a strong current seam, you may catch 10 fish on 10 casts. A few weeks from now, Wood and I may not burn a pint of outboard gas all day long to catch all the fish we want.

But we want them now—despite the fact that the dogwood tree 20 feet from my back door is as naked as a baby and duck waders and decoys are still heaped on the basement floor. Surely, a few shad must be as impatient as we are.

Bite on Time
“That looks good,” Wood says. We’ve fished together enough that I know exactly where he’s looking. I clamber onto the bow deck and ready the anchor. Downstream of a small creek mouth, Wood spins the boat and noses the bow upcurrent, inside the swift water of a current seam that trails below the tributary. Migrating hickories key on current breaks where they can nose upstream in slower water, seeking out paths of least resistance—eddies and seams downstream of creek mouths, rocky outcrops, fallen trees.

I throw the anchor, check the set, and let the boat settle into the seam. Wood already has a fly in the water, a small weighted Clouser-like shad dart. As he retrieves, I quarter-cast downstream and shake extra line from the rod tip as the line sweeps below the boat. When the line pulls taut, I retrieve the fly with short strips. Nothing. We each fire off a half-dozen prospecting casts. Neither of us scores a bite.

It’s too early to be easy.

I glance around for any sign of life along the creek bank, but February seems to have a bony grip on the water, trees, and sky. Not a creature is stirring.

“We do this every year,” I say. “And every year we tell ourselves, never again. Just wait a few more—”

“There he is!” Wood interrupts.

His 6-weight rod is dancing, and just like that, we’re into fish. I have a fly in the water before Wood boats his first shad, and a hick hits as soon as my line stretches taut in the current. This is how it always happens: Catch one fish and you know there are more—it’s just a matter of finding the school’s center of mass. Wood and I pull in a dozen, one after another. Half of the fish clear the water in silvery leaps. Then the action slows. Three casts and nothing. Six casts and it’s over. This school of migrants has passed, surging under the boat, and the sunlight winking through bare overhead branches tells us it’s too early to expect another wave close on their fins.

It’ll happen, those 100-fish days, those short-sleeve afternoons. The fish are coming, driven by warming waters and lengthening days. For the moment, though, Wood and I pull the anchor and hunt for the impatient ones, the early risers, the ones that can’t wait. They’re in the river—a few of them, at least. They have no choice, come February.
I know the feeling.

Tip of the Month: Hydro Hauling
The best way to cast a sinking line from a boat is to water-haul. Roll cast and shoot the line in the intended direction. Lower the rod tip, then pick the line up before it sinks, allowing water tension to drag the line and help load the rod on the back cast. To present the fly, use only as much casting power as on the last false cast. Overpowering the rod with a sinking line overextends the tip and spoils the cast. Use a faster haul on the forward cast; let the weight of the line do the work.