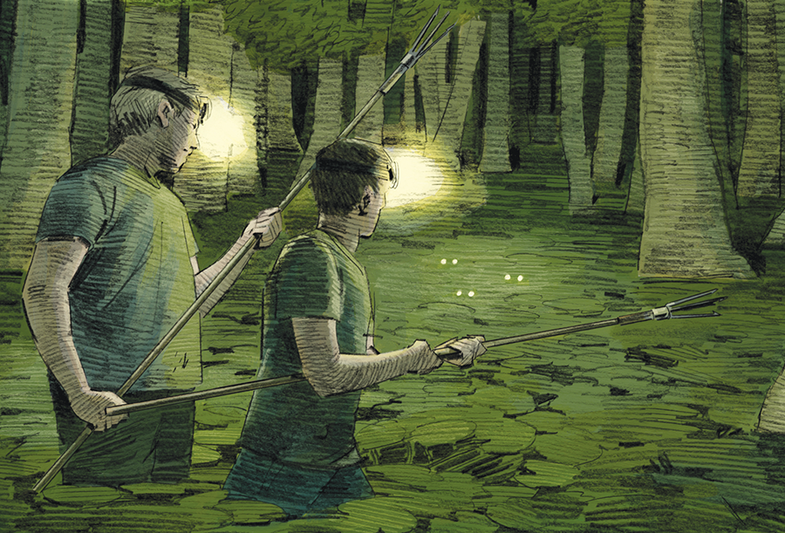 When I’m frog hunting and I catch a bullfrog in a headlamp beam, it just does something to my brain. It opens up a flood of adrenaline and flips a switch from present-day to pri­meval. I scull the paddle carefully, minimizing the wake that spreads out from the canoe, and hold the light steady as I guide Jack to the sweet spot: 6 feet from the shining eyes and 11 o’clock to the frog. The canoe bumps something underwater, and I suck in a breath. The frog blinks with the muffled percussion but doesn’t move. Leaning over the bow, Jack is like an old ship’s figurehead, still as a carved mermaid except for the quiver in his shoulders as he grasps the gig. Closing in on a frog may be the most focused Jack and I get all year. This is an evening of frog gigging we’ll both enjoy.

There are still places left where a 15-year-old boy frog gigging with his dad is just another summer Saturday night, but Jack and I don’t live in one of them. We live in a decent-size town full of decent city dwellers, many of whom consider frog gigging as outdated as bloodletting with leeches. When I mention that I’ve been slinking along dark pond edges with Poseidon’s weapon in hand, I get plenty of looks from folks who can’t hide an expression of alarm, if not outright disdain.

Frog gigging? Are you serious? People still do that?

At times, it’s kind of fun to live in a place like this.

Take a Stab
Jack and I slide the canoe into Van’s Pond as the first nighthawks swoop overhead, wingbeats ruffling like a deck of shuffled cards. Jack is in the bow seat, headlamp on, with a 12-foot cane-pole gig along the right-side gunwale. There’s not much additional equipment for our frog hunting expedition. We have an old pillowcase for the frogs, life jackets, and a small cooler of cold drinks. I have a headlamp, too, and a handheld spotlight tied to a thwart in case the boat goes over. I paddle gently, sweeping the big light along the shoreline. Hundreds of spider eyes reflect the light in green constellations. Water striders scatter. There’s a muskrat and snakes. Then a pair of yellow beads, unblinking, appears above the frowny face of a frog chin.

“Got him,” Jack replies.

I ease the boat close, keeping my body perfectly still so the canoe doesn’t rock. Twenty feet. Ten. Jack raises the gig like a javelin thrower in a Greek tapestry. We’re close enough now. When he drives the gig down into the muck, the canoe rocks. “Easy, big man!” I shout. “Watch your balance!” He holds the gig pole with one hand, the gunwale with another. Now comes the tricky part: extricating the frog from the barbed gig. You can’t be squeamish. You don’t really know if you have frog, mud, or both until you slide your hand all the way down the shaft, feel your way down the gig head, and there—a handful of squirm and wiggle at the bottom of the abyss.

By the time we get to the swamp end of the pond, a dozen frogs are lumped in the pillowcase. I ease out of the boat into thigh-deep water and tie the canoe to my waist. From here on out we stalk like herons. Teamwork goes out the window. We are each a one-man hit squad, armed with a headlamp and a gig.

Jack goes a little crazy gigging frogs by foot. He loses sense of time and place, following that mesmerizing cone of light into briery, viney, tangled swamp depths he’d never wade in the bright light of day. I’ll turn around and barely see his headlamp, winking in and out behind the trees like a firefly as he plows shoulder-deep in swamp goo with his gig held high. It’s as if a switch goes off in his brain. It’s good for a boy to be a boy on a hot summer night.

We add a few more frogs to the pillowcase and call it quits. By now we’re wet to the shoulders, lashed with vines and bug-­bitten. We smell like summer garbage. Midnight slipped past some time ago. It will take a scrub brush to clean blood from the canoe in the morning, and I’ll be a grouch the rest of the day—grumpy from lack of sleep, a sore back, and the first itch spots of the raging poison ivy rash to come.

We have maybe a dozen and a half frogs in the pillowcase and 10 minutes of hatchet work to ready them for a plastic baggie. I suppose it’s not a lot to show for the effort. It will take three times as long to cook those frogs as to clean the bones. But filling our belly was never the point. There are some mighty fine lessons to be learned on a frog pond: Don’t fear the dark. Most snakes are harmless. Spiderwebs in your hair, in your mouth, across your face—they never killed anybody. So many of the best waters lie just beyond your fears.

And this I’ll admit: I want Jack to be able to say, “I was frog gigging the other night…” and grin to himself when he gets those looks.

Frog gigging? Are you serious?

A couple of Cajun giggers showed me a handy trick for dealing with a mess of frogs, and it works in a canoe or a johnboat. The stern paddler places a board across the gunwales, in front of his knees. When the bow gigger sticks a frog, he swings the gig overhead and back to the bow guy, who wrenches the frog off the gig, places it on the board, and chops the legs off with a hatchet. The carcass gets flipped overboard for raccoon chow. Clean and easy.