Illustration by Jeffrey Smith Kirk McInnis died too early and too hard. Scott Wood and I cut cattail stalks for... 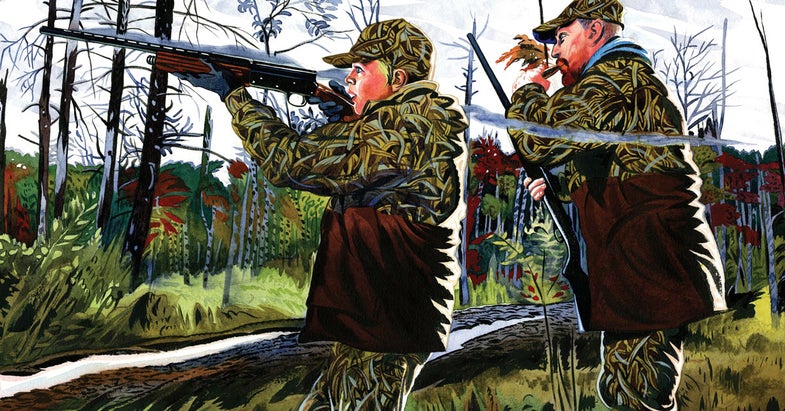 Kirk McInnis died too early and too hard. Scott Wood and I cut cattail stalks for his casket spray, swatting mosquitoes in the late-summer heat, and couldn’t believe he was gone—Kirk with his Sure-Shot Yentzen call, his wire-rimmed glasses, his old-school gruff ways that never quite hid a gentle inner spirit.

It was nine years later when another in our little circle of swamp duckers stopped by the house. Tom Valone rang the doorbell, and I could see through the wooden shutters that he was holding something. I waved him in. Tom was uncharacteristically solemn. As he unzipped an old camouflage gun case, he said: “Let me tell you a story.”

Young Guns
In 1965, when Kirk turned 12, Tom began, his uncle gave him a shotgun. The uncle had bought the gun for his wife, and had the stock cut and outfitted with a recoil pad, but it turned out that she liked the country club better than clays. Kirk hunted with the gun for five formative seasons, then retired it.

“It’s a little bitty thing,” Tom said, and what he pulled from that gun case was a stop-the-traffic beauty—a 1958 Browning Auto-5 Light Twenty, with a round-knob pistol grip. The wood was burnished and worn, and the bluing was in fine shape.

Kirk was a good friend of mine, but he was Tom’s best friend. Two months before Kirk died, when Tom’s boys, Fielder and Sam, were 12 and 10, Kirk gave the gun to Tom. He wanted Tom’s boys to grow up with it, to learn how to lead a bird with that Browning, and for it to be a small part of their own friendships forged in a duck swamp. And it wouldn’t hurt, Kirk said, for those kids to know that the man who owned this gun made some poor choices in life, and left the world too young.

Fielder and Sam shot doves and clay targets with that gun, listening to the A-5’s long-action ka-thunk of a recoil as the barrel slammed back and forth, and learned to love its quirks. Then they did what young boys do: They outgrew it.

Which is what brought Tom by my front porch. Kirk had plans for that shotgun. “When your boys outgrow the gun,” Kirk told Tom, “they have to pass it on to another kid. I don’t want the gun to ever have an owner. Its role is to teach.”

“He was very specific with his directives,” Tom told me. “And very adamant. And if you’ll agree to Kirk’s wishes, then I want your boy to have this gun.”

I was speechless, my gratitude rooted in Kirk’s memory. That wasn’t the scene when I showed the gun to my son, Jack. He howled in delight. Jack shot his first wood duck, mallard, and dove with that gun. He shot clays and cans and sycamore leaves floating down Black Creek. The seminal moments of Jack’s young, wild love affair with hunting were tied intimately to that historic Auto-5. I remember watching him stalk doves feeding in soybean stubble, and when the birds flushed and he connected he held that gun to the sky and whooped with joy. I remember a certain mallard—“the mallard,” as it came to be known. We’d jumped a pond and I missed that greenhead three times before Jack fired Kirk’s gun once, and rolled the duck into the water. For a long moment he stared at that gun as though he’d pulled King Arthur’s sword from the stone.

Jack shot Kirk’s gun longer than he should have, hunched up over that humpback receiver like a grown man with a Red Ryder. He was loath to give it up, for Kirk’s gun was the key that had opened a new world. But when it came time to hand it down, there was no question where it would go. Scott Wood had known Kirk even longer than I did. His boy, Alex, had a birthright to that Browning. He shoots it to this day, although soon enough he will pass it along.

The Story Continues
Counting Kirk, that’s five young hunters who have learned to shoot with his gun. Five young hunters who have layered their own dings and scratches on that old wood stock, who stared down sunrises and screaming wood ducks along that barrel. I think Kirk realized that there’s a season for the shiny new things, a time and a purpose for the latest and the best. But he saw a growing number of new young hunters with their $1,000 starter shotguns. He knew there are connections we are in danger of losing, and that his old humpback Browning could offer kids a chance to sink their own roots into a legacy that would never pass away.

This time of year I’m scouting duck swamps, despite the fact that it’s hot and awful outside. It’s when I miss Kirk the most, when I remember my armfuls of cattail stalks from that October day 15 years ago. And at this time of year I can picture Tom, standing in my living room, holding an old gun case. When he finished telling me the story, Tom slid the shotgun back in its case. “That’s about it,” he said, but we both knew the story wasn’t over. There was new life, and another new beginning, for Kirk’s old hand-me-down gun.

Tip of the Month: Timing Is Everything

Young shooters who spend the summer practicing on clay birds by starting with a mounted gun run a high risk of breaking a cardinal wingshooting rule: They’ll see a dove coming, mount the gun too early, and chase the bird with the bead. Practice field-condition mounting now: Start with the shotgun at the low position, butt tucked gently under the bicep. Get the muzzle moving with the target, and mount and fire with a single smooth swing.