What to do with Baby Critters in Distress

Photo courtesy Eric Schumuttenmaer/Flickr Here’s one for all the parents out there: Spring is in the air, and that means... 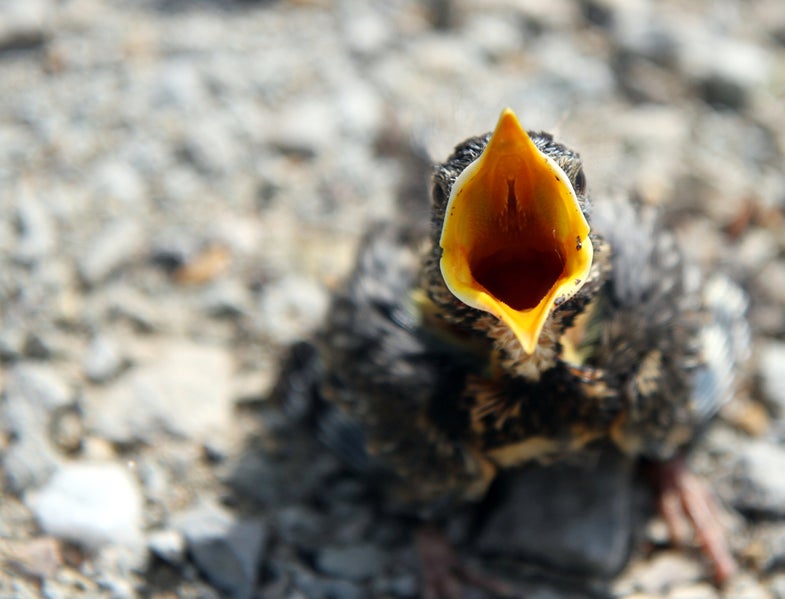 Here’s one for all the parents out there: Spring is in the air, and that means it’s only a matter of time before a downy-soft Tweety chick or baby bunny winds up stranded in the backyard. It’s hard to tell your child that helping a wild animal baby can be harmful in the long run, but that’s often the case. Wild animals need to be afraid of humans, and they have to learn to recognize food and know how to get it. Even the briefest visit with a human family can seriously impair a wild animal’s ability to survive on its own. And truth be told, it’s a violation of federal law to keep any migratory bird.

But when Muffin is wailing, “Do something, Daddy!” — you can. Just do the right thing.

Birds
Most baby birds found on the ground aren’t in immediate peril. If the bird is obviously hurt or sick and you are so inclined, take it to a wildlife rehabber. Otherwise, get close enough with your child to assess the bird. If the chick is a fledgling, fully feathered and hopping along the ground, its parents are likely nearby. Most birds learn to fly from the ground, not the nest, and parents will feed it until it’s on its own. Birds with few feathers are nestlings, and likely fell straight down from their natal perch. Try to find the nest, and carefully replace them. Ignore the old saw about birds abandoning their chicks if they smell a human. Most can hardly smell at all.

If you find a nestling bird but you can’t reach its nest, help your child make a halfway house for the chick. Clean a plastic bowl such as a margarine container, punch a few holes in the bottom to drain away rain, and line the bowl with paper towels. Tack this emergency shelter in the tree as close to the original nest, then carefully place the nestling inside. Many times, the parents will feed the chick and care for it until it’s ready to fly.

Mammals
Infant squirrels are blown out of leafy nests by high winds. Rabbits nest in small depressions in grassy areas, and are easily disturbed by Fido, lawnmowers, and kids playing Kick the Can. If the animal is bleeding, shivering, vomiting, or was attacked by another animal, take it to a wildlife rehabber. Otherwise, play Rescue Hero. If you can find a rabbit’s nest, carefully replace the baby. If you can’t find the nest, put li’l Bugs in a shallow box lined with clean towels, and place the box in shade near where you found the rabbit. Place tyke-sized squirrels in a box and put this at the base of their nest tree

Turtles
While baby turtles can fend for themselves, injured turtles are commonly found. Skilled wildlife rehabbers can often save turtles even with missing chunks of shell. Place a turtle in a box with a clean towel so it doesn’t slide around, cover it to keep it dark and quiet, and take it to a wildlife rehabber.