A Full-Velvet Muley in Whitetail Country

The south central region is overlap country. Parts of the western half of Texas, New Mexico, and the western Panhandle... 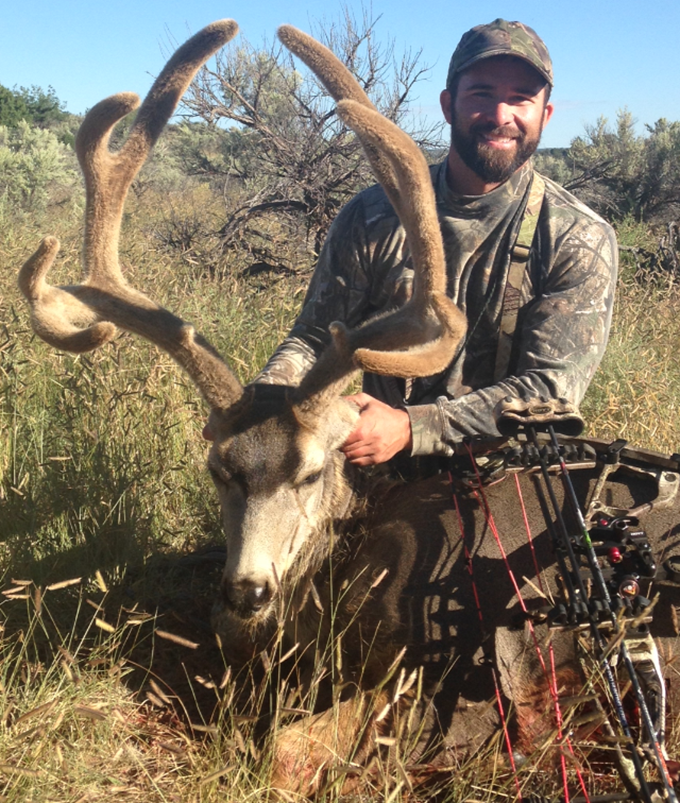 The south central region is overlap country. Parts of the western half of Texas, New Mexico, and the western Panhandle of Oklahoma are home to mule deer. Since fall of 2010, times have been tough for them. The stress of the prolonged drought meant few to no fawns survived, and there was some adult mortality. Antler growth was average. Parts of New Mexico were hit very hard by the drought, dropping herd numbers of deer and antelope significantly. One friend hunted antelope last month in one of our old public land hotspots in central New Mexico, a place where we often saw 30-40 bucks a day. He said he saw 8 bucks total and there were more hunters than antelope in that unit. The drought has affected elk and upland bird numbers as well. It will take time and much needed moisture for herd numbers to recover.

My personal observations on my home turf in the Texas Panhandle show that 2014 is the first year for any significant fawn crop. I’ve seen multiple mule deer does with twins this year. That’s very encouraging. The improved moisture this year, better cover to hide fawns and better feed for the does to stay healthy, has surely contributed to this. That’s all good news for the future.

Another observation I make every year on my turf: While every whitetail in the area has shed its velvet by September 15, mule deer, and particularly bigger bucks, often stay in full velvet through the first week in October. I killed a mature 10-point a few years ago on October 7. His rack was still in perfect, soft velvet. Mule deer in my part of the world seem to hold their velvet longer than anywhere I’ve ever heard of. Of course, my local mule deer also shed their antlers as late as anywhere I know. Most bucks drop their antlers in February and March, but I’ve seen a few with racks in spring turkey season in April! So it only makes sense that because they shed their antlers late, and get a late start growing next year’s rack, they would stay in velvet longer.

Mule deer bucks tend to express their best antlers a little later in life than whitetails. I’ve seen it myself on bucks close to home and have heard biologists confirm that. Mule deer peak at 6 ½ to 8 ½. It’s a three-part formula to grow a big buck: genetics, age and diet. Environmental factors like drought, harsh winters, and spring and summer moisture all effect feed and therefore diet in quantity and nutritional value. Big mule deer bucks are harder to grow and harder to find than whitetails, because the mule deer’s range is smaller than the widespread range of whitetails in North America.

Bowhunter Kurt Stallings made the most of an archery mule deer tag this month. He arrowed the heavy-horned, tall-racked velvet beauty in the photo above in New Mexico. The buck’s rack reportedly gross-scores about 181 inches. So despite the drought and reduced numbers, there are still some bucks worth hunting. Kurt punched an antelope tag in New Mexico last month too, so his season is off to a great start. His diligent practice and long-range shooting skills with his Hoyt bow are paying off. Kurt has a couple of good spots to hunt whitetails, so I’m betting we see his face again later this season on the Rut Report.