A Good Time for a Last-Chance Buck

Deer hunting time is running out in the south-central region. But the last hunt of the season can be as... 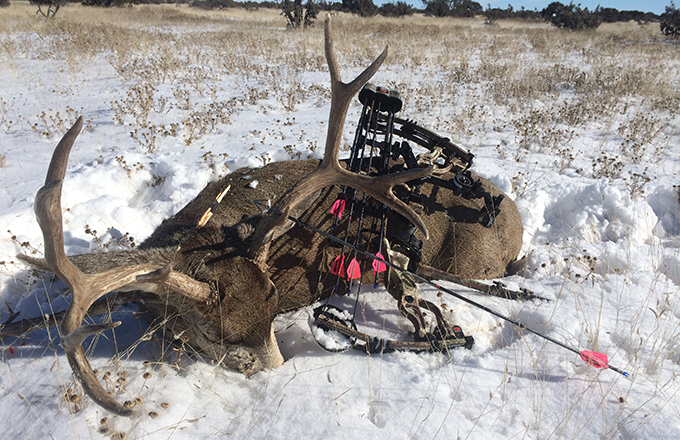 Deer hunting time is running out in the south-central region. But the last hunt of the season can be as good as the first. That’s not just a catchy line to sell hand warmers; it’s true. Cold hands and numb toes are worth putting up with for chance at a big buck, right?

In New Mexico, snow blanketed parts of the desert this week. White-faced muley bucks were chasing does through the chollas and prickly pear flats. Early January means the rut is on in the desert, and only bowhunting is legal. My friend Kyle Barbour, featured here back in December with a fine Texas whitetail, jumped across the state line to hunt New Mexico mule deer this month, and the photo above indicates how he did. Here’s what Kyle had this to say about his hunt.

“It was really cold on January 5 when I killed my buck. There was 8-12 inches of snow on the ground on the ranch I hunted. We used a Polaris Ranger to get around and glass for deer. The buck I shot was with four does. We found them at 9:30 in the morning. I stalked in behind a cedar tree for a 51-yard shot with my Hoyt bow. The buck spun at the shot, but my Solid broadhead got good penetration. A finishing shot ended it. He was a pretty 10-point and my first mule deer. I saw an even bigger buck with a harem of does earlier in the hunt, but I’m happy with the one I got. It was a cool hunt in neat desert country with junipers, cholla cactus and yuccas all covered in deep snow.”

In south Texas, the rut is far from over. Down on the Texas-Mexico border, mid-December through mid-January is the equivalent to November in the Midwest. Robert Sanders, Temple Ranch manager and a whitetail expert by any definition of the term, including college degrees, hunting experience, and time in the field, shared the following.

“For the moment, mature bucks seem to be a little more patternable. Some are back in their home range. Most are run down with visible battle scars and broken tines, and are 20-25 pounds lighter than six weeks ago. We are right on the edge of the secondary rut, which can be an exciting time to hunt in south Texas. Some great trophies are still taken during the late season, so don’t give up!”

South Texas’ hunting culture is like nowhere else. Hunters drive monster trucks with automatic corn feeders mounted on the truck bumpers. The rigs are equipped for “top drive,” meaning the steering column extends through the roof of the truck cab to a driving platform built on the roof, so you can spot deer from above the sea of thorns. Bagged corn is sold at corner gas stations and deer contests are common in small towns. Spanish is more commonly spoken than English, and deer leases bring more money than cattle leases.

Research Boone and Crockett records and you’ll see county names like Dimmit, Jim Hogg, Duval, Maverick, Webb, McMullen, and La Salle mentioned often. The number of 160-class deer taken in this region every year is staggering. And bigger bucks–way bigger, like 200-plus–are killed every year. But the real charm of the brush is the quantity of deer you see every day in good habitat, including many “average” bucks. Seeing twenty deer in a morning hunt and another ten or twenty in the afternoon is possible. Half of those might be bucks. The heart of this big buck zone is referred to as the Golden Triangle for its big-buck growing reputation. It’s a place like nowhere else.

I remember a late-season hunt in the brush country several years ago, when I sat in an elevated blind at the spokes of four senderos carved through the jungle-thick thorns. Late in the day, a mature doe stepped out onto a sendero. She was nervous, twitching her tail and watching her back trail. Moments later, the brush popped like a bulldozer was coming through it. The doe bolted and four good bucks chased her up and down the sendero, through the brush and all around my lookout. The best one was a heavy-beamed 10-point with antlers the color of coal. I got my scope on him twice, but brush was in the way and he never stopped long enough for a clear shot. As quickly as the rut chase had started, the deer disappeared and the thorns went quiet.

I hunted that stand again and again, looking for that specific old buck, but he never showed. Eventually I shot a mature 8-point with my rifle. He’d be a fine buck anywhere in whitetail country, but it’s the buck that got away I remember more than the one I took home.

First hunt of the season or last, if you are in the right spot, the late season is worth hunting.