At or Near Peak Rut, Bucks Moving During Daylight

Overall activity status: The rut is at peak or close to it in the northern half of the region. Here’s... 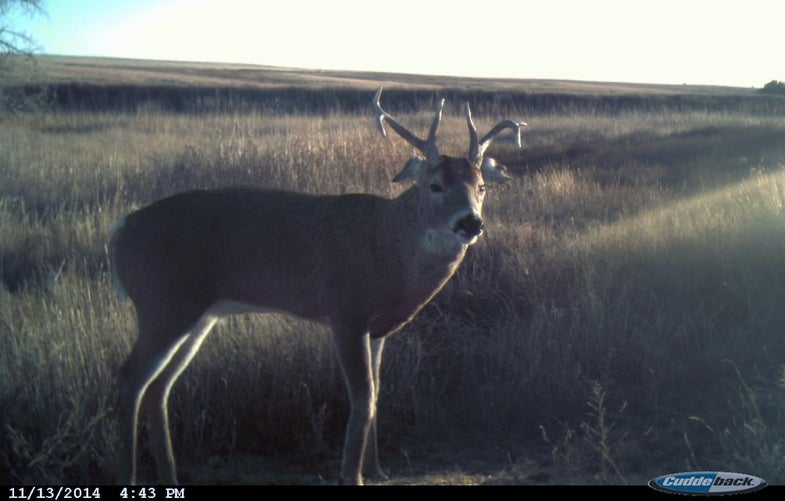 Overall activity status: The rut is at peak or close to it in the northern half of the region. Here’s an example: After a recent road trip, I had put some of my gear near the door to my barn before I put it away, including a Dave Smith buck decoy. When I pulled up to the barn the other night after dark, my headlights showed a small 4-point buck postured up and staring at my decoy!
Robert Sanders, ranch manager for the Temple Ranch in South Texas, reported the following on that region, where the rut is usually later than the rest of the state. “The rut is just around the corner here. Bucks have split up and are starting to show territorial dominance. Observed a couple of serious fights last couple of days, with some bucks showing interest in does. Thanksgiving week would be a good time to rattle.”

Chasing: “Little and medium bucks out chasing today,” Jeff Bonner, Texas Parks & Wildlife biologist in the Panhandle region, told me over the weekend. “Saw six bucks and four does. All does were being followed.”

Ty Bartoskewitz, ranch manager for the MT7 Ranch near Breckenridge, which is between Dallas and Abilene, said bucks have been chasing there for the past two weeks.

Rub making: Shawn Hoover sent me a photo of a gnarly rub in northwestern Oklahoma. The tree was about five inches in diameter and shredded. He said he found another big rub 100 yards farther down the ravine.

Scrape making: No scrapes reported in the northern half of the region. Bucks at this stage are so busy chasing and seeking that they often neglect scrapes.

Fighting: A buck on my trail camera now has only brow tines and stubby beams where once he had a decent rack. All tines on both sides are missing. I killed a buck on November 21 with 3 inches broken off his left G-3 (more on this in my next post). A few days earlier he was on trail camera with his rack intact. The later we get into November and December, the greater chance bucks will have some damage to their racks from fighting.

Estrous signs: Anytime you see a doe this time of year, watch behind her for a trailing buck. Sometimes the trailing buck might be minutes behind or several hundred yards behind her, sorting out her scent, so be patient.

Daytime movement: In October, the first and last hour of daylight was the only time you might see a buck. The last ten days, my trail camera has taken photos at every hour of the day, especially midday. Bucks and does are constantly on the move. Colder weather only amplifies this all-day action.

The photo above shows that even old bucks are moving in daylight. My friend Shawn first spotted this ancient buck three years ago in northwestern Oklahoma, and he thought the buck was over the hill back then. He nicknamed him Frosty because his ear tips appear to have been frozen off, maybe when he was a fawn. His weird rack shrunk considerably from a few years ago to its current size. Shawn guesses the buck is 9½ or 10½ years old.

X Factor: While Texas has had more moisture this year than in years past, some counties are still dry. Don’t overlook hunting over waterholes during the rut. A rut-weary buck will need water to refuel. Set a trail camera at a windmill or stock pond that has plenty of tracks. The camera will tell you what time of day is best. Last week, I drove up to a windmill at midday and eight deer, including two small bucks, were standing around the water’s edge.